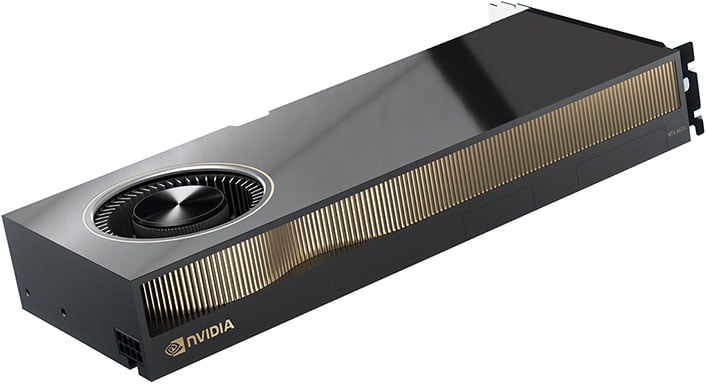 NVIDIA has a new boss graphics card in the workstation sector, that being the burly RTX A6000. It is built around a full-fat Ampere GA102 GPU, which means if offers all the CUDA cores NVIDIA could squish into the thing—none of them have been disabled, because this is a flagship version of Ampere in all its glory, built to handle some serious workloads.
"Unlock the next generation of revolutionary designs, scientific breakthroughs, and immersive entertainment with the NVIDIA RTX A6000, the world's most powerful visual computing GPU for desktop workstations. With cutting-edge performance and features, the RTX A6000 lets you work at the speed of inspiration—to tackle the urgent needs of today and meet the rapidly evolving, compute-intensive tasks of tomorrow," NVIDIA says.
Here's a handy rundown of the specifications...
This is a monster graphics card capable of 38.7 TFLOPs of single-precision (FP32) performance. For comparison, the GeForce RTX 3090—NVIDIA's flagship consumer graphics card—sports 10,496 CUDA cores and 24GB of GDDR6X memory, to deliver up to 35.58 TFLOPS of single-precision performance. It does have a higher memory bandwidth, though, at 936.2GB/s.
"Connect two RTX A6000 cards with NVLink to double the effective memory footprint and scale application performance by enabling GPU-to-GPU data transfers at rates up to 112.5 GB/s (total bandwidth)," NVIDIA says.
In addition to a full-fat Ampere GPU, this card benefits from NVIDIA's second-generation RT cores, to bolster its ray tracing performance versus the previous generation. We have already seen how well NVIDIA's latest RT cores work on the consumer (gaming) side, and the same type of performance uptick should translate over to professional workloads as well.

NVIDIA's newest workstation card draws power from a single 8-pin power connector, with a 300W max power consumption. It features an NVLink for connecting multiple cards (giving users 96GB of combined GPU memory), and four DisplayPort 1.4 connectors.
The card is available now to those who can put it to good use, priced at $4,650.