In September, the NVIDIA GeForce RTX 3080 launched and, while they still are mostly out of stock, people who got their hands on one could be looking to customize their rare find. As we reported in our review of the card, the GeForce RTX 3080 is a gaming monster that can get a little hot under the collar. Liquid cooling would solve most heat issues, and EK Water Blocks (EKWB) has you covered. The company's new lineup of liquid coolers look slick, and they even have RGB to boot.

After the GeForce RTX 3080 launch, EK released the Quantum Vector RTX 3080/3090 D-RGB, which did not support Founders Edition cards. At the time, EK reported that “will get their own, separate, specifically designed EK water blocks,” which would be “something really special for those graphics cards.” Now, EK has released the Quantum Vector FE RTX 3080 D-RGB, which is a special edition water block for Founders Edition cards, as the name implies. 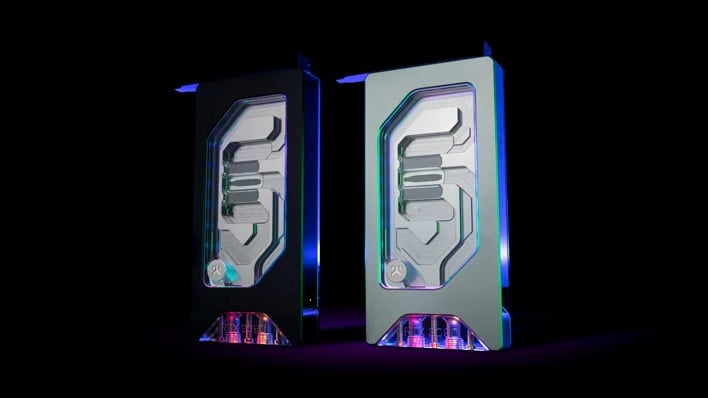 The new water block will come in silver and black versions with an aluminum outer shell, Plexiglass window, exclusive Founders Edition backplate, and a terminal illuminated by addressable RGB LEDs. The block itself is “purpose-designed with an extremely thick copper base for high-performance, allowing it to clear all components of the densely-packed PCB and adding more heat removal capacity in the process.” It will cool the GPU, VRAM, and VRM while also “in contact with MOSFETs and chokes to maximize cooling and minimize the chances of unwanted coil whine.” The water block is all CNC machined, with the base milled from a nickel-plated “12mm thick piece of pure electrolytic copper sourced from Europe.”

Alongside the gorgeous machine work and internal design, you get a single-slot I/O shield and two different terminals that users can swap out. One of the terminals offers the standard four vertical ports through the block while the other has two horizontal ports going directly inward. With whatever terminal you chose, it is “neatly located between two prongs on the PCB, utilizing minimal space.” Furthermore, EK writes that “This kind of design allows for incredible versatility, especially for Small Form Factor builds, and of course, more interesting aesthetics.”

If this water block sounds like something you need for your GeForce RTX 3080 Founders Edition card, you can preorder it on EK’s website. The EK craftsmanship will run you 269.90€ (approx. $320) and will start shipping around early December. Later orders will then come out in the weeks to follow the first batch, so you will want to preorder early to build your liquid cooling loop. Overall, we think these water blocks look gorgeous but let us know what you think of these water blocks in the comments below.