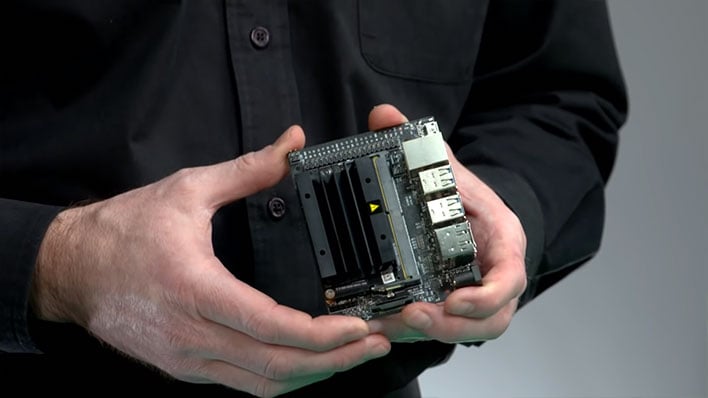 A lot of expensive hardware and other swank prizes are up for grabs, courtesy of NVIDIA and Hackster.io partnering to launch the AI the Edge Challenge. It's a competition centered around NVIDIA's Jetson Nano Developer Kit, whereby developers are being asked to build "unique and creative projects" to chance to win from a pool of prizes valued at around $100,000.
"In this contest, you’ll tap into the power of the new NVIDIA Jetson Nano—a powerful, easy-to-use, mini AI computer that lets you run multiple neural networks in parallel. It’s perfect for any project using image classification, object detection, segmentation, speech processing, and more," Hackster.io states in a blog post.

Obviously NVIDIA is interested in promoting the Jetson Nano, though tying into that, NVIDIA and Hackster.io are sending the message that adding artificial intelligence to a project does not have to be a daunting affair. This competition is a neat way to encourage developers to give it a whirl, and potentially win some sweet prizes in return.
Developers are free to be creative, though there are three specific categories the competing projects must fall into. They include...
NVIDIA and Hackster.io will select one of the projects for a special "AI Social Impact Award," which recognizes a solution that leverages AI to have a clear and positive impact on people's lives and/or the environment.
Thousands of prizes are up for grabs, including a Titan RTX, Jetson AGX Xavier Developer Kit, Public Cloud Compute credits, NVIDIA Shield, free access to courses from NVIDIA's Deep Learning Institute (DLI), and even a paid trip to NVIDIA GTX 2020.
Follow this link for more information on how to compete.