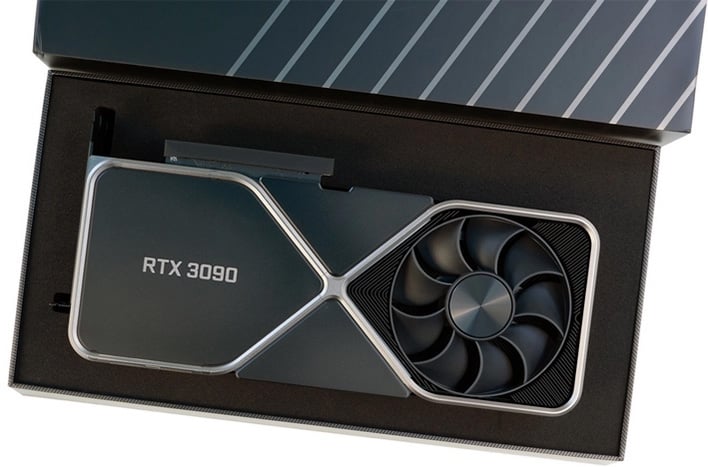 As promised, the GeForce RTX 3090 launched to retail today, and as expected, it disappeared pretty much right away. But then something a bit unexpected happened. I saw it back in stock, both on NVIDIA's own website and at Best Buy (a few listings, anyway). But was it a mirage? Can you really order one? Or is it truly out of stock? Yes.
So here's the deal—the GeForce RTX 30 series is a hit, starting with the GeForce RTX 3080 that launched to retail last week and has been crushing benchmarks, followed by today's launch of the GeForce RTX 3090. The card that came first flew off store shelves, the result of hyper demand by both eager gamers and annoying scalpers armed with bots.
This prompted an apology by NVIDIA, for underestimating the demand and not doing a better job at beating back the bots. NVIDIA also warned that the GeForce RTX 3090 would sell out in short order, because it is basically a new generation Titan, and as such is intended for a smaller audience.

"Since we built GeForce RTX 3090 for a unique group of users, like the Titan RTX before it, we want to apologize upfront that this will be in limited supply on launch day," said NVIDIA. "We know this is frustrating, and we’re working with our partners to increase the supply in the weeks to come. 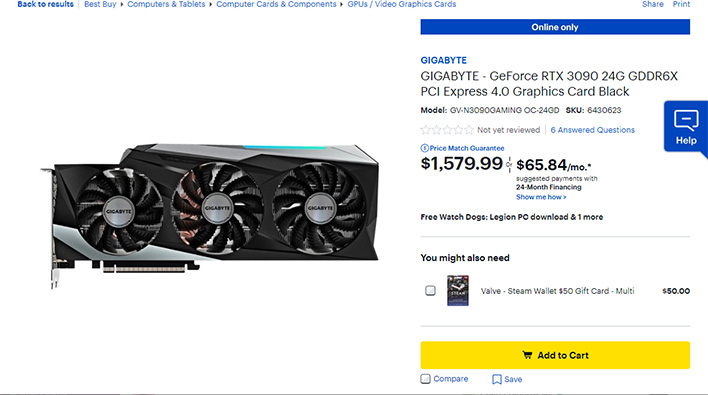 And so it has come to pass—retail availability of the GeForce RTX 3090 is a mirage, of sorts. At the time of this writing, I'm still seeing a custom model from Gigabyte available to "Add to Cart" at Best Buy, but if I attempt to do that, a message pops up saying, "This item is currently unavailable for online purchase. The item was not added to your cart."
NVIDIA's site has shown brief glimpses of availability, but they disappear quickly. I have not confirmed this, but my hunch is that this is a battle between sellers (including NVIDIA and sites like Best Buy) and bots. As orders by bots end up being manually cancelled, it temporary frees up inventory, which gets snatched up in a flash. Rinse and repeat until every available unit is sold for good. So, you could potentially still buy a GeForce RTX 3090, if you're quick on the draw and lucky as well.

Don't fret too much over this one, though. The GeForce RTX 3090 delivers monster performance, for sure. But at $1,499 (and up), the value proposition is greatly diminished compared to the GeForce RTX 3080 ($699), and presumably the upcoming GeForce RTX 3070 ($499), plus whatever else NVIDIA might have on tap. Most gamers will be better off holding out for one of those card (or possibly Big Navi, depending on how AMD's Radeon RX 6000 series performs).