With the global chip shortage putting the entire consumer electronics and PC industry on edge, tech companies are looking for additional ways to get more product into the hands of consumers. One sector that has faced incredible demand and lagging supply for the past year is PC GPUs, but NVIDIA is switching gears to supply its entry-level GeForce RTX 3060 Ampere card to more consumers.

According to a new report, NVIDIA is finding further use for GA104 GPUs that can't cut it in higher-end GeForce RTX 3070 and GeForce RTX 3070 Ti. Matthew Smith (aka @T4CFantasy) claims that these defective GA104 GPUs are now destined for China, where they will have 3,584 CUDA cores and 12GB GDDR6 memory using a 192-bit interface -- matching the specs of the existing GA106-based GeForce RTX 3060. 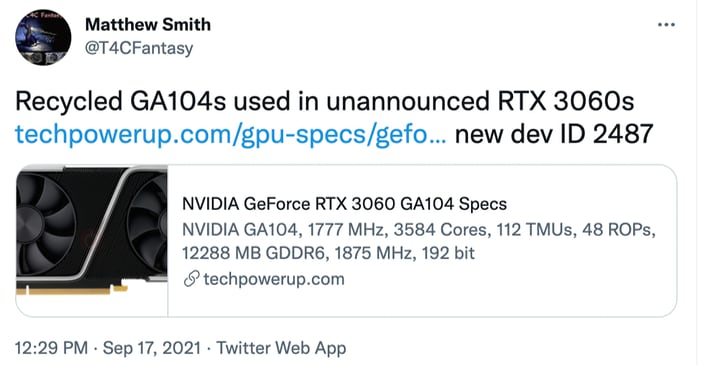 VideoCardz reports that the GA106 and GA104 GPUs have the same pin layout, which should make it easier for NVIDIA's board partners to pop in the new chips and get boards out to customers. That's nothing but good news for customers looking to get their hands on a GeForce RTX 3060 amid this chip shortage.

This move isn't unprecedented. For example, during NVIDIA's Turing days, the company used defective TU104 GPUs in place of TU106 GPUs found in the GeForce RTX 2060. After all, repurposing GPUs that can't be used for higher-end boards makes perfect sense for silicon that would otherwise be discarded.

However, the downside with these new GA104-based GeForce RTX 3060 cards is that they will only be available for the Chinese market. According to reports, consumer protection laws prevent NVIDIA from making the chips available in the United States and European markets. So while the GA104 shift might make a dent in the supply doubt in China, those of us here in the U.S. are simply out of luck.