NVIDIA is expanding its laptop GPU line with a few new SKUs that seemingly take aim at driving down price points for gamers and creators. The expanded stack is highlighted by the GeForce RTX 2050, which actually wields more CUDA cores than the GeForce RTX 2060 in mobile form (more on that in a moment), and the GeForce MX570 and MX550.
The GeForce RTX 2050 is based on NVIDIA's previous generation Turing architecture rather than Ampere, the latter of which drives its GeForce RTX 30 series on both desktop and mobile. From the outside looking in, it appears NVIDIA is having an easier time sourcing 12-nanometer FinFET silicon from TSMC—today's unveiling follows the release of the upgraded GeForce RTX 2060 desktop GPU with 12GB of GDDR6 memory earlier this month.
"Joining the lineup of GeForce RTX 20 series laptops is the GeForce RTX 2050. These new laptops feature RT Cores, Tensor Cores, and NVIDIA Encoder to enable our suite of features including ray tracing, NVIDIA DLSS, Reflex, and Broadcast, among others. The RTX 2050 also works seamlessly with NVIDIA Optimus technology to give you the perfect balance between long battery life and optimum performance," NVIDIA explains. 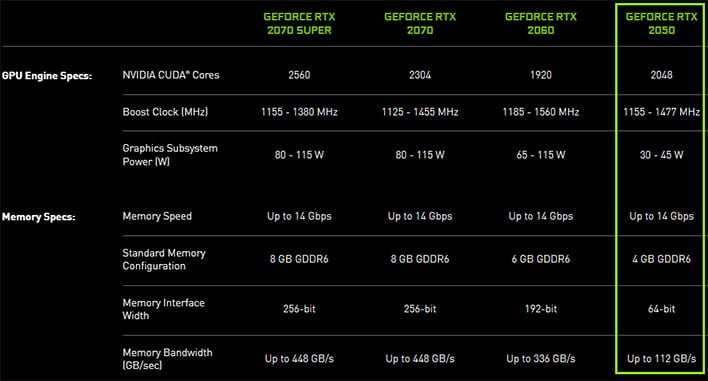 The GeForce RTX 2050 arrives with 2,048 CUDA cores underneath the hood, compared to 1,920 CUDA cores on the GeForce RTX 2060. However, it has a significantly narrower bus width at 64-bit (versus 192-bit) yielding 112GB/s of memory bandwidth, versus 336GB/s on the higher end SKU, and less memory at 4GB of GDDR6 (versus 6GB).
It also has a much lower power rating at 30-45W, compared to 65-115W. We'll have to wait and see how laptops outfitted with the GeForce RTX 2050 actually perform, though looking at the specs, we anticipate trading some graphics performance for lower thermals and potentially longer battery life, while retaining support for RTX technologies. Depending on pricing, these could be intriguing laptops for budget buyers. 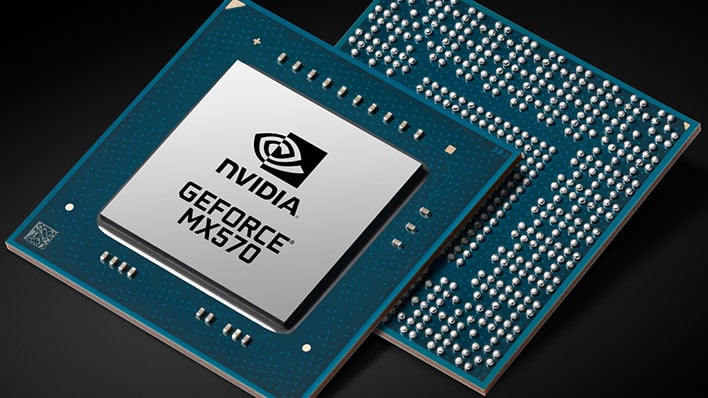 NVIDIA is also rolling out a couple of MX additions, specifically the GeForce MX570 and MX550. Fine-grain specifications have not been revealed yet, though NVIDIA did say these feature "more power-efficient CUDA cores" and tout "faster memory speeds than previous MX GPUs."
It's also revealed that the GeForce MX550 is a direct replacement for the GeForce MX450. Put it all together and our assumption is that these are based on NVIDIA's Ampere architecture rather than Turing, though that has not been confirmed.
All three of these new GPUs will find their way to laptops in Spring 2022.