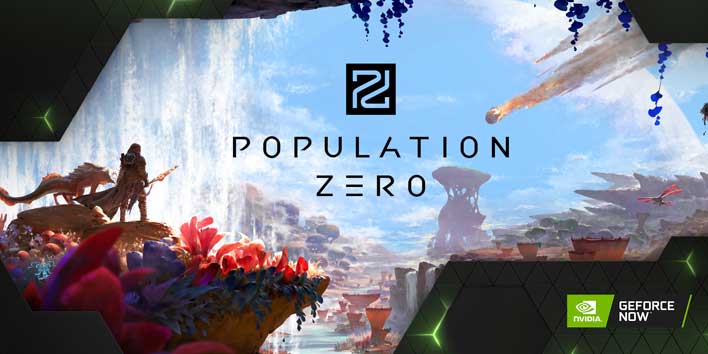 The goal of the GeForce NOW cloud gaming service is to give gamers what NVIDIA calls a world-class GeForce PC gaming experience with low latency and ray-traced graphics on nearly any device. The streaming game service supports Mac, Android, Shield TV, and even low-specification PCs. NVIDIA remains committed to rolling out new instantly accessible games every week and has announced new games coming to the service this week with 19 new titles in all.

All 19 Game Ready on GeForce NOW games have been optimized for cloud gaming and include Game Ready Driver performance improvements. NVIDIA manages all game updates and patches on Game Ready titles, and if a game supports RTX, ray-traced graphics are featured on the paid tier of the service.

The flagship game for this week is Population Zero, which launched on Tuesday, May 5. The game released on GeForce NOW the same day the game launched on Steam. Population Zero follows an explorer whose ship was destroyed and has no chance to return to Earth. Players have 168 hours to repair the reactor and restart their hibernation pod to survive human extinction. To unite with fellow colonists or destroy them is a decision left to the player in Population Zero. Those who fail to restart their hibernation pod will become a creature of nightmares. The game is on sale for $24.89 through May 12.

The service will get a new playable demo of a game called Ghostrunner from publisher All in! Games that will be on the service soon. The trailer for the game can be seen above. The full list game releases for this week includes:

The new games for this week feature a range of genres offering something for everyone. More games will help entice new subscribers to the service. In March, an NVIDIA team member announced GeForce NOW was seeing a substantial increase in players and the amount of playtime during the coronavirus pandemic. However, there service has also had to deal with some high-profile defections in recent months.