Imagine a next-generation GeForce RTX graphics card built around a GPU manufactured by Intel. Sounds farfetched, right? It's actually not. While nothing of the sort is imminent or on any current roadmap, NVIDIA CEO Jensen Huang was surprisingly upfront about the possibility during a recent question and answer session.
"Our strategy is to expand our supply base with diversity and redundancy at every single layer. At the chip layer, at the substrate layer, the system layer, at every single layer. We've diversified the number of nodes, we've diversified the number of foundries, and Intel is an excellent partner of ours," Huang said, as transcribed by Tom's Hardware. "They're interested in us using their foundries, and we're very interested in exploring it."
This is interesting on a number of levels. For one, Intel is about to make a spirited run at the discrete GPU market with its Arc Alchemist lineup, followed by several generations of planned follow-ups. This is not Larrabee all over again, but a much bigger play, with AMD's former graphics boss Raja Koduri spearheading the effort. 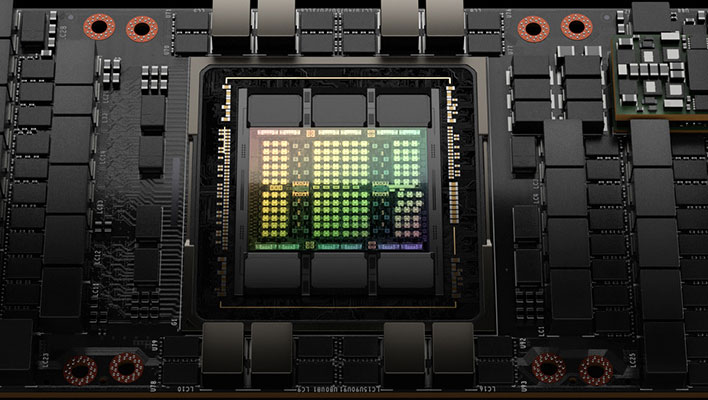 Likewise, NVIDIA has made major gains in the lucrative data center market where Intel is a mainstay. And it's not entirely GPU-based, either. NVIDIA just announced a 144-core Grace CPU Superchip, which is essentially two Arm-based Grace CPUs on one module, linked by way of a high-speed interconnect.
And then there are the multiple market sectors in between. There's all kinds of overlap, and it's that overlap that makes this a more nuanced discussion. Huang elaborated on this a bit.
"We have been working closely with Intel, sharing with them our roadmap long before we share it with the public, for years. Intel has known our secrets for years. AMD has known our secrets for years," Huang added. "We are sophisticated and mature enough to realize that we have to collaborate."
Huang went on to say that NVIDIA shares its roadmaps, albeit in a confidential manner with a "very selective channel of communications. The industry has just learned how to work in that way."
None of this is surprising in and of itself, rather it's the straight talk that comes as a surprise. It's a slight peek at how the sausage is made, so to speak.
"We compete with many companies, but we also partner deeply with them and rely on them. As I mentioned, if not for AMD CPUs in DGX, we couldn't ship DGX. If not for Intel CPUs and all of the hyperscalers connected to our HGX, we wouldn't be able to ship HGX. If not for Intel's CPUs in our Omniverse computers that are coming up, we wouldn’t be able to do the digital twin simulations that rely so deeply on the single-threaded performance that they're really good at," Huang said.
As for Intel specifically, Huang said he is a "encouraged by the work" it is doing and the direction it is headed. He also expressed interesting in "looking at their process technology," noting that NVIDIA's relationship with Intel is "quite long."
"We work with them across a whole lot of different areas, every single PC, every single laptop, every single PC, supercomputer, we collaborate." Huang said.
If and when NVIDIA ever taps Intel to build its chips, GPUs or otherwise, it won't be in the immediate future. These things take time and there are multiple pieces that have to align, including technology, business models, and capacities, to name a few. But never say never.