If you are of a certain age, the Nintendo Game Boy was likely a constant companion during childhood. The original was powered by four AA batteries, could easily be slipped into a pocket, carried along for long car rides (if it wasn't too dark outside), and generally provided hours of gaming fun.

As its name implies, the Game Boy was a relatively small device for its time, but one Nintendo fan made a supersized version of the console. Witness the Game Man, which skipped straight over adolescence into adulthood, and is the brainchild of a gamer named Grumpy Modeler. While the original Game Boy stood 5.8 inches tall with a monochrome display that measured 2.6 inches across, the Game Man's off-the-shelf display adds approximately three inches diagonally and color.

Another significant upgrade comes from the fact that the Game Man's display has a resolution of 640x480, which might seem a bit outdated by today's FHD and QHD+ displays found in modern smartphones. However, it's a huge step up from the 160x144 display on the Game Boy.

Given the larger dimensions of the Game Man, it would be relatively trivial to power the console using a Raspberry Pi or similar single-board computer to run Game Boy games via emulation. However, Grumpy Modeler instead went with an old and crusty Famicom console, the Japanese market equivalent of the original Nintendo Entertainment System. So, instead of playing Game Boy games, the Game Man natively uses original Famicom cartridges. All the components are housed within a 3D-printed case. 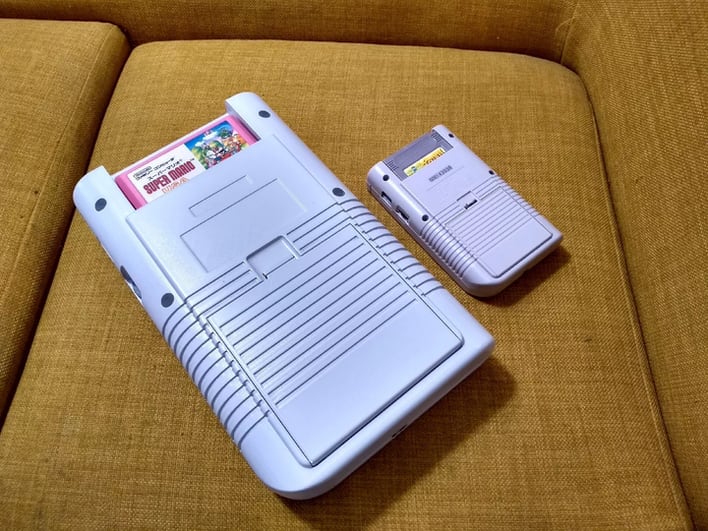 The result is a supersized but still somewhat portable recreation of a gaming legend that first debuted over three decades ago. Grumpy Modeler describes the Game Man as a "completely impractical and pointless" exercise, but we disagree wholeheartedly. It's quite a fetching device, and a 1/4 headphone jack on the bottom of the device outputs to composite cables for connecting the Game Man to your old school tube television.

And best yet, if you want to recreate this bundle of retro gaming joy for yourself, Grumpy Modeler has all the components you'll need and instructions right here. If you're up to the challenge, this seems like an excellent project to tackle on the weekends as COVID-19 restrictions are slowly lifted around the country.