It is quite a time to be a fan of Nintendo, what with all the copyright claims and takedowns the company has been doing. But wait, there's some light at the end of the tunnel: Wii Sports!

Technically it is not Wii Sports, but it is a follow-up to the massively popular included game from Nintendo's previous best-selling console. Announced with its recent Nintendo Direct, Nintendo Switch Sports includes fan-favorites, like Bowling and Tennis, and adds some new faces to the title. The new games include Badminton, Soccer, Volleyball, and Chambara.


Method of play on the new title from Nintendo looks to be about the same as its Wii predecessor, relying heavily on motion control in conjunction with the Joy-Cons. With a physical copy of the title, consumers will also receive a leg-strap, previously sold separately or included with Ring Fit. Using the strap, players can play shoot-out on the soccer game included.

Additional features include online play, including 1v1, 2v2, or free-for-all. Games can also be played in a somewhat competitive mode online for the first time. The example given in the video for online play is related to bowling. It looks like a live elimination mode where all players bowl at once and the last one standing wins. Who would have expected bowling to get battle royale?


Of course, Nintendo is not one to shy away from local play, as some consoles have lately, so you'll still be able to complete side by side with your family. Some eagle-eyed viewers might realize something is missing in the announcement video. Where is boxing? There is no mention of boxing on the video or its website related to the product. Chambara, a sword-play game, seems to be the replacement for the popular combat sport. [Editor's Note: Wait, no baseball!? C'mon Nintendo, hammering home runs against the kids is a joy every parent should experience!] 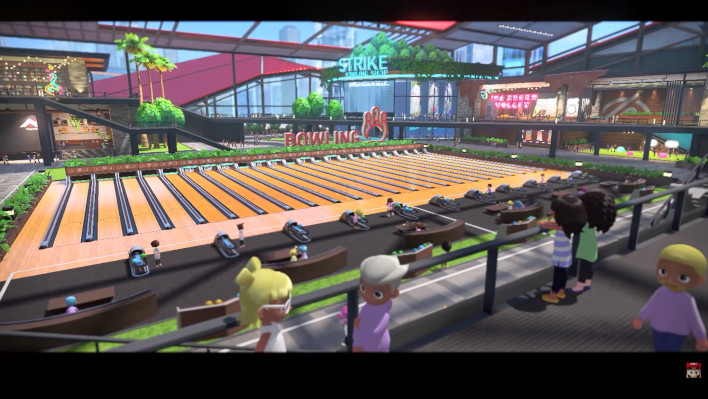 Also in the video was an announcement of a free DLC update to Soccer and the addition of Golf later. Other items in the Nintendo Direct include new courses for Mario Kart 8 Deluxe, Mario Strikers, Xenoblade Chronicles, Fire Emblem Warriors: Three Hopes, a co-op mode for Splatoon 3, and Kirby and the Forgotten land. Check out all the details for Nintendo Switch Sports on the official product page.
So when is all this gaming goodness arriving? Online play tests will take place this month, with Nintendo opening up registrations on February 15 at 8:00pm ET (5:00pm PT). The game gets a proper launch on April 29.