NVIDIA has over the years signed some big names in the automotive world for its DRIVE platform, and the company is making a big announcement in conjunction with one of the leaders in the premium sector: Mercedes-Benz. Next-generation Mercedes vehicles will leverage NVIDIA’s future DRIVE platform that is powered by the Orin SoC. Orin is based on 7nm Ampere architecture and can scale in implementation from as little as 5W in low-end configurations to as high as 800W for Level 5 autonomous robotaxis.

Mercedes says that the hardware/software solution will provide Level 2 and Level 3 autonomy, along with automated parking functionality that scales up to Level 4. Using a combination of NVIDIA hardware and software developed between the two companies, next-generation Mercedes vehicles will be capable of autonomous driving from “address to address”, likely similar in concept to what we see with Tesla’s Autopilot autonomous system. 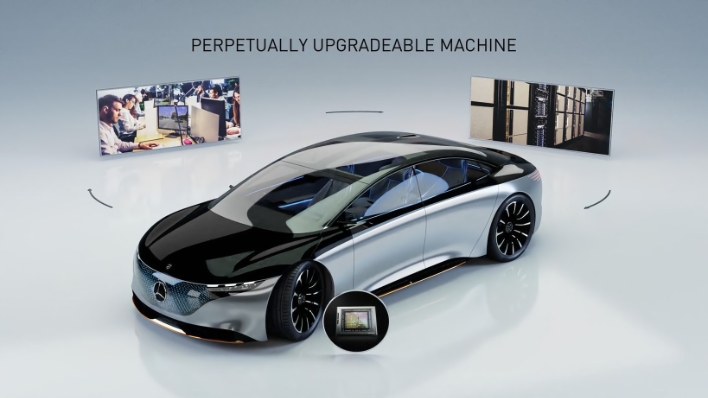 Also like Tesla vehicles, Mercedes plans to add a paid component to its software, as customer will be able to upgrade their vehicles post-purchase via subscription services and take advantage of over-the-air updates. The concept of “in-app purchases” for vehicles might have seemed far-fetched even 6 or 7 years ago, but ability to continuously improve our vehicles through software is making them more phone-like.

"This new platform will become an efficient, centralized and software-defined system in our future Mercedes-Benz vehicles," said Ola Källenius, Chairman of the Board of Management of Daimler AG and Head of Mercedes-Benz AG. "NVIDIA’s AI computing architecture will help us streamline our journey towards autonomous driving."

"It’s clear from our extensive discussions with Ola and his team that we share a common vision of the automobile of the future," added NVIDIA CEO Jensen Huang. "Together, we’re going to revolutionize the car ownership experience, making the vehicle software programmable and continuously upgradeable via over-the-air updates."

The first vehicles that will emerge from Mercedes’ partnership with NVIDIA will start rolling off the assembly line in 2024, and the constant software updates – some free, some paid – will keep the vehicle’s features and software interfaces feeling fresh through 2030 and beyond.