NASA's Mars InSight lander captured the sound from a large meteoroid impact back in December of 2021. The spacecraft recorded the first audio of a meteoroid impacting another planet back in September, 2021.

On December 24, 2021, the Mars InSight lander felt the ground beneath it shake. InSight's team later discovered that the shaking was caused by a magnitude 4 marsquake, caused by a massive meteor crashing into Mars' surface. The crater left behind from the meteor is one of the largest to be seen on Mars since NASA began exploring the cosmos. Perhaps more interesting, chunks of ice can be seen surrounding the location where the meteorite hit. NASA says that because of this, future manned missions to Mars will more than likely be impacted.

Scientists determined the cause of the marsquake after viewing before and after pictures taken by the Mars Reconnaissance Orbiter (MRO). The events, and the after effects, have been documented in a paper published on October 27, 2022, in the journal Science. 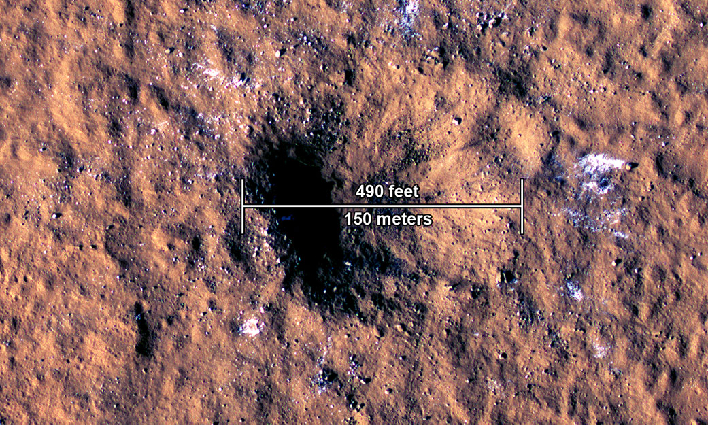 The meteoroid that slammed into the Martian surface would have burned up in Earth's atmosphere, before ever reaching the ground. However, because Mars has such a thin atmosphere, it was able to reach the ground. Scientists estimate the meteor spanned around 16 to 39 feet (5 to 12 meters). The impact occurred in a region on Mars called Amazonis Planitia, and created a crater roughly 492 feet (150 meters) across, and 70 feet (21 meters deep). NASA estimates that some of the debris that was cast from the impact flew as far as 23 miles (37 kilometers) away.

"It's unprecedented to find a fresh impact of this size," remarked Ingrid Dauber of Brown University, and leads InSight's Impact Science Working Group. "It's an exciting moment in geological history, and we got to witness it."

The audio that was captured is said to be the first that included surface waves. Surface waves are seismic waves that "ripple along the top of a planet's crust."

InSight is running low on power, and is expected to shut down within the next six weeks, according to NASA. Therefore, any and all new data that can be collected from this valuable spacecraft will certainly be exciting.