NASA's Double Asteroid Redirection Test (DART) spacecraft has captured its first images of its deep space target. The journeyed spacecraft is on a mission to crash into Dimorphos, the asteroid moonlet of Didymos, in order to collect data on a spacecraft being used to deflect an asteroid for planetary defense.

While there are currently no known asteroids on a collision course with Earth in the near future, that is not stopping scientists and astronomers from seeking out some sort of defense system from one doing so. NASA's DART spacecraft will soon be colliding with its target, asteroid Dimorphos, becoming the world's first test of the kinetic impact technique, or using a spacecraft to deflect an asteroid for planetary defense. It appears the doomsday spacecraft has its target in its sights.

DART has already began sending back images from deep space of its intended target, 243 to be more precise. The image of the light from asteroid Didymos and the spacecraft's target, Dimorphos, is a composite of the 243 images collected by the Didymos Reconnaissance and Asteroid Camera for Optical navigation, or simply DRACO. 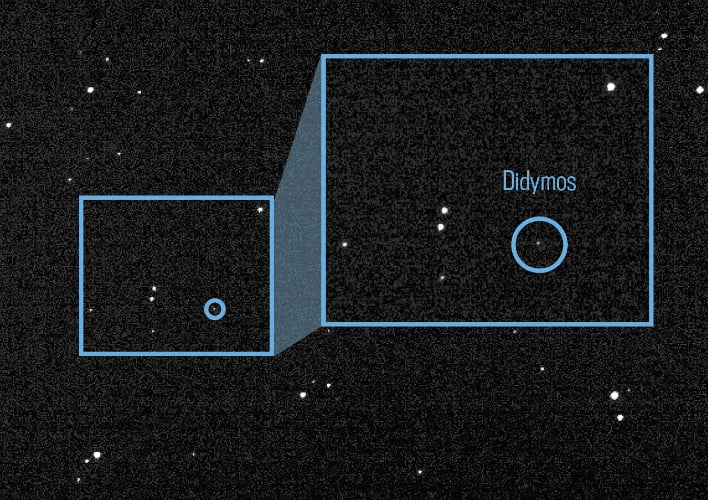 The spacecraft was still about 20 million miles away from its target when the images were taken on July 27, 2022. This is why the Didymos system still appears to be very faint. Navigation camera experts were not positive if DRACO would be able to detect the asteroid quite yet. However, the composite made by the 243 images gave the team all they needed to identify Didymos and pinpoint its location.

The first set of images is being used as a test of the imaging techniques deployed with DART and DRACO. While the images appear similar to what could be produced by ground telescopes, it is important to the mission that DRACO is capable of such images and working properly ahead of when the team will need to use future images to make any necessary adjustments, according to Elena Adams, the DART mission systems engineer at the Johns Hopkins Applied Physics Laboratory (APL) in Laurel, Maryland.

"Seeing the DRACO images of Didymos for the first time, we can iron out the best settings for DRACO and fine-tune the software," remarked Julie Bellerose, the DART navigation lead at NASA's Jet Propulsion Laboratory in Pasadena, California. "In September, we'll refine where DART is aiming by getting a more precise determination of Didymos' location."

NASA will utilize observations taken every five hours over the next several weeks. These observations will be used to execute three trajectory correction maneuvers during that time period, each reducing the margin of error for the spacecraft to make impact. The final maneuver is scheduled for September 25, 2022, just 24 hours ahead of its planned collision with the asteroid moonlet on September 26th.