Musk Buys Stake In Twitter After Criticizing It Over Free Speech, And TWTR Shares Soar

Elon Musk sent Twitter into a frenzy last month with several tweets that seemed to hint at the billionaire either buying the social media platform or starting his own. What only few knew, however, is that the billionaire had already become the largest shareholder of Twitter already.

Musk took to Twitter last month asking for people to vote on whether they felt the platform adhered to free speech. He followed up the poll with a warning of sorts, stating “The consequences of this poll will be important. Please vote carefully.” This led many to speculate that the multi-billionaire might be thinking of buying the platform or perhaps starting his own.

But what people did not know was that he had already bought a 9.2% stake in the company, worth an estimated $2.89 billion, a week or so prior to his tweets. The purchase on March 14th of this year made him Twitter’s biggest shareholder and has since sent Twitter’s stock value surging as much as 26% after the purchase was made public on Monday. The surge is the stock’s biggest intraday increase in more than four years.

The poll that Musk ran on Twitter ended with a resounding 70.4% saying they did not think Twitter rigorously adhered to the free speech principle. He followed up the poll results by asking what should be done, and if a new platform was needed. This led many to believe that he might be thinking about starting his own social media platform. 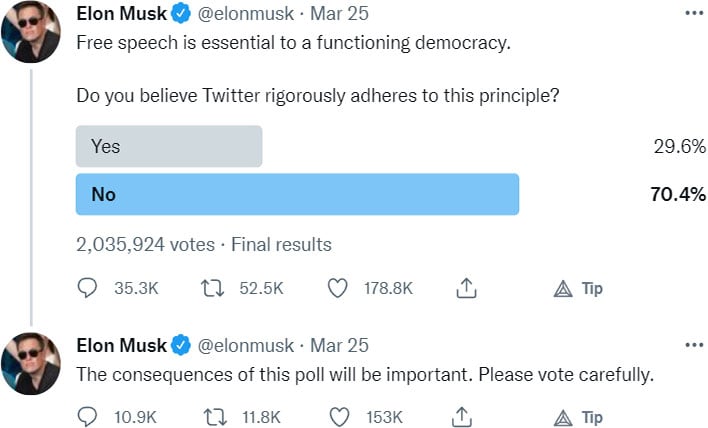 Epic’s Tim Sweeney even replied, “To hell with platforms! We need a protocol so lots of companies can make clients for it without becoming our new overlord.”

While Musk’s recent purchase of stocks is viewed as a passive stake, Wedbush analyst Dan Ives told CNBC that the purchase “could lead to some sort of buyout.” Ives continued, “It looks like Elon has his eyes laser set on Twitter”, adding that it could lead to a “more aggressive ownership role.” So, while Sweeney is safe from Elon becoming Twitter’s overlord at the moment, that could change in the near future.

Elon has made it very clear that he is a “free speech absolutist”. After claiming that Starlink had been told by a few governments to block Russian news sources, he responded in a tweet, “We will not do so unless at gunpoint.”

Time will tell if the world’s richest person does more with his newly acquired stocks of Twitter in the coming days. All we can do for now is speculate what a Elon Musk ran Twitter would look like.