MSI is jumping into the fray with two customer cards based on the flagship GPU, and they look mighty impressive from where we're sitting: the Radeon RX 6900 XT Gaming Trio 16G and the Radeon RX 6900 XT Gaming X Trio 16G. Both cards are very similar in outward appearance (triple fans) and specs, as you'll find 80 compute units (5120 stream processors), 16GB of 16Gbps GDDR6 memory operating on a 256-bit bus. The cards also have three DisplayPort 1.4 ports along with a single HDMI 2.1 port. 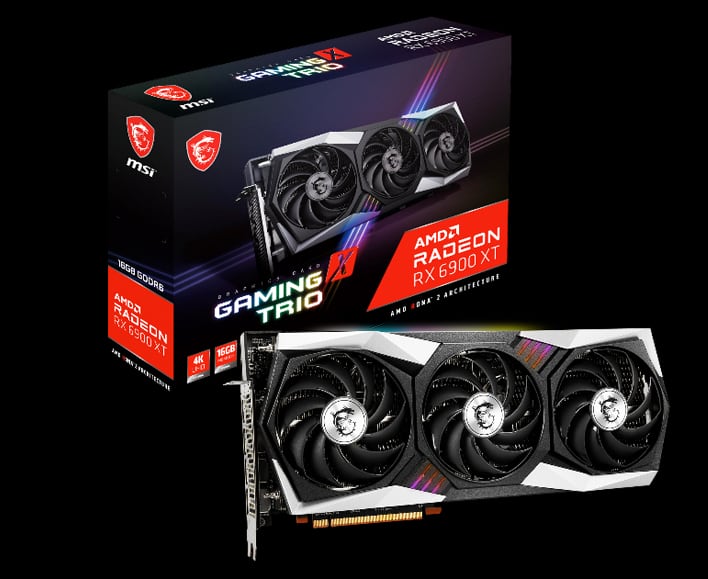 Unfortunately for gamers out there looking to get their hands on these new cards -- as with most other highly desirable PC hardware launched during the latter half of 2020 -- the Radeon RX 6900 XT is nearly impossible to obtain due to supply issues. And the $999 price is nowhere close to what gamers must pay to get their hands on a card (if they can find one in stock in the first place). For example, third-party sellers on Amazon Marketplace are listing the Sapphire Radeon RX 6900 XT (which is basically a reference card) for an insane $1,849. Radeon RX 6900 XT cards on eBay are also selling for $1,600+, which is unfortunate.

Although it would be nice to see MSI's new Radeon RX 6900 XT graphics cards hit the $999 price (or maybe just a little bit above that for the Gaming X Trio), they too will likely see inflated pricing once they are released to the market this month. As for when we can see increased supply in the market to satisfy demand, AMD says that "additional reference cards are expected to be available in the first quarter of 2021."