MediaTek is adding to its ever-growing stable of Dimensity chips for mobile devices, this latest one being the Dimensity 8200. The announcement comes a month after MediaTek unveiled its flagship Dimensity 9200 silicon. Like that chip, the Dimensity 8200 is built on a 4-nanometer class manufacturing process and takes aim at premium gaming phones, but at a "more accessible price point," the company says.
In other words, MediaTek is promising flagship gaming performance at closer to mainstream price points, since not everyone can or is willing to splurge on the top smartphone models. 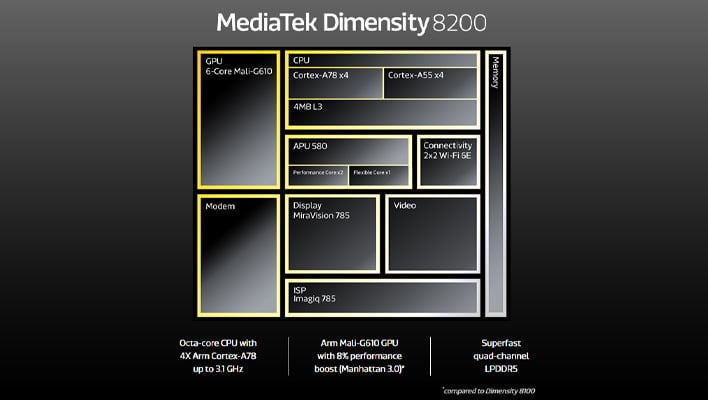 To deliver on MediaTek's promises, the Dimensity 8200 features an octa-core design with a primary Arm Cortex-A78 core clocked at 3.1GHz, three more Cortex-A78 cores clocked at 3GHz, and four Cortex-A55 cores running at 2GHz. It also features 4MB of L3 cache.
It's a less powerful makeup compared to the 9200, which is configured with a Cortex-X2 core clocked at 3.05GHz, three Cortex-A710 cores running a 2.85GHz, and four Cortex-A510 cores clocked at 1.8GHz. Nevertheless, the core configuration of the Dimensity 8200 would have been considered top notch not that long ago. Plus, it's a decent upgrade from its predecessor, the Dimensity 8000.

For graphics, the Dimensity 8200 is armed with a Mali-G610 GPU. The chipset further leverages MediaTek's HyperEngine 6.0 gaming technologies, which are aimed at reducing latency and optimizing touch inputs for smoother gameplay. Also notable is that the chipset supports the Vulkan SDK, AI-enhanced variable rate shading (AI-VRS), and ray tracing.

Outside of gaming, the Dimensity 8200 is also powered by a "flagship-level Imagiq 785 ISP" that supports 320-megapixel photos, and is capable of capturing 14-bit HDR video on up to three cameras at the same time, with "fast AI noise reduction" to boot.
MediaTek says the Dimensity 8200 will find its way to 5G phones starting this month. The company's also touting a global market, though it's mostly Chinese manufacturers that end up using MediaTek hardware. Poking around the web, it looks like RedMi and Xiaomi will be among the first to incorporate the new chipset.