We want two #1 meals, both with Coke and a PlayStation 5 controller. And let's not ask for permission from Sony first, please. McDonald's Australia is celebrating its 50th anniversary down under with three months of events that recently hit a speed bump.

In June, Maccas (short for McDonald's in Australia) announced in a press release that it had hit its 50th anniversary after arriving in 1971. With over 1.1 billion Big Macs sold and great growth, the company wanted to thank Aussie customers by "throwing its biggest celebration yet, launching a new range of never-before-seen promotions, menu items and unique collaborations from June until the end of August." 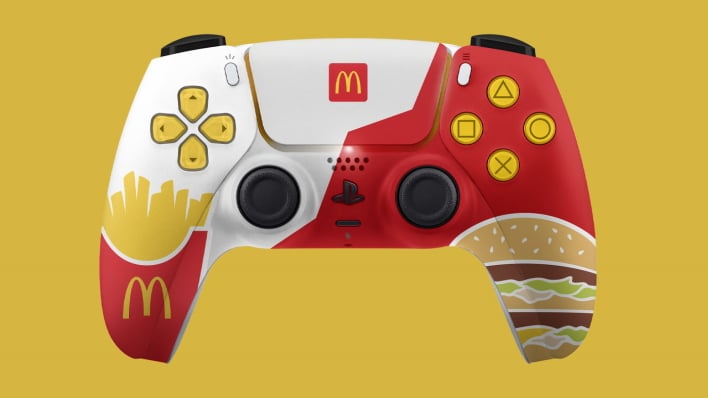 Initially, one of these events was a "Stream Week," where popular content creators would stream for McDonald's Australia, and the food chain would give away prizes. This included 50 limited edition McDonald's-themed PS5 controllers, which looked rather nice. However, McDonald's seemingly forgot to give Sony a heads up about this, and the gaming company had to step in. Below is the statement from McDonald's, who issued a retraction after Sony shut things down, as quoted by PressStart:

McDonald's: “Unfortunately, McDonald’s stream week has been postponed and won’t be going ahead this Sunday. We are unable to confirm a new date for the proposed event at this time. We will have some great prizing including Macca’s 50th Birthday Hoodies and 50 channel subscriptions for each streamer to give away. We will be in contact with the new timing as soon as we have it confirmed.”

Sony: “Sony PlayStation has not authorised the use of its controller in promotional materials related to the proposed Stream Week event and we apologise for any inconvenience caused. McDonald’s stream week has been postponed and Sony PlayStation controllers will not be included in the giveaway.”

With how open-ended McDonald's statement is, perhaps the chain will eventually be able to give away the custom controllers, as it appears that many people actually liked them. In fact, we would like to get our hands on these as well just because they would be cool collector's items, so come on, McDonald's, get your 'Mac together.
(Controller Image Courtesy of McDonald's Australia via Mattias Wahl)