Do aliens, specifically humanoid beings, live on Mars? While many people would answer this question with a definitive no, others are hopeful that life forms will be found on the Red Planet. Some claim that an image of the Martian surface clearly depicts a humanoid life form.

The rumors of alien life appear to have originally come from a website called UFO Sightings Daily by Scott C. Waring. Waring zoomed in on one particular rock and claimed that a small person was lying down on it. They argued that the person appeared to be about a foot tall, had red hair, was wearing a suit, and carrying a backpack. They also insisted that one could see “footprints” behind the figure that lead to their resting place. Waring contends that this image is “100% proof of intelligent life.” 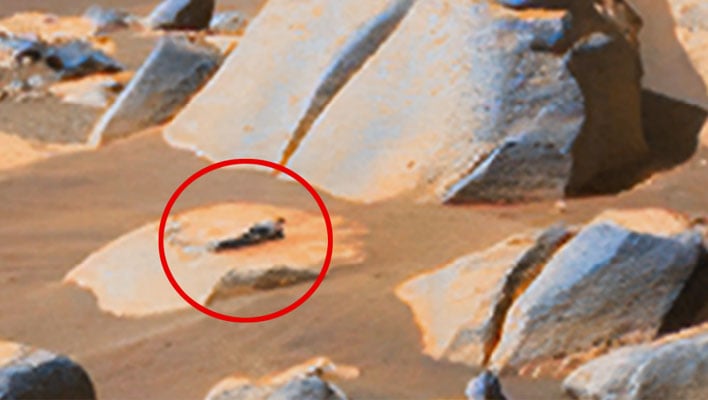 Closeup of the 'alien' 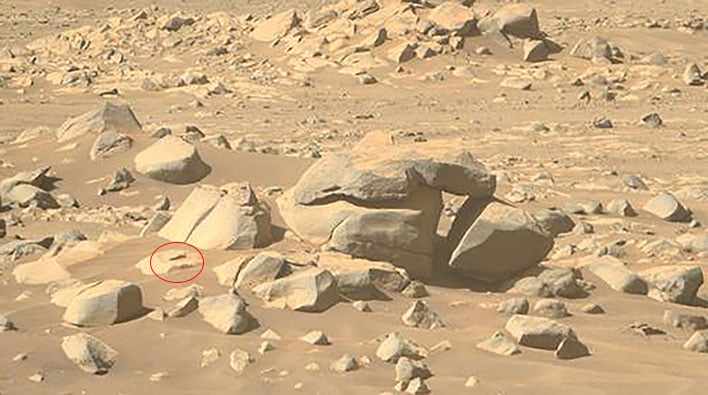 The “alien” is most likely a shadow created by the multi-layer rock. However, Waring’s excitement is quite natural. According to the Merriam-Webster Dictionary, pareidolia is “the tendency to perceive a specific, often meaningful image in a random or ambiguous visual pattern.” People particularly seem to see images of animals and faces. For example, the idea of the “Man in the Moon” would be categorized as a pareidolic image. Some people are able to experience pareidolia more strongly than others, but the phenomenon overall is fairly common. It is so common to see “faces” in rock formations, that these specific rock formations even have their own name-- “mimetoliths.”

The image of the “alien” was taken by the Mars Perseverance rover last April but has only become famous this past week. One of the main purposes of the mission is to search for evidence of ancient life. It is believed that the Jezero Crater featured a lake between 3.9 billion to 3.5 billion years ago.

The rover has been collecting samples, including rock cores. These should eventually be retrieved by a Mars sample-return mission. NASA recently worked on unclogging the carousel that houses these samples as pebble-sized debris was getting in the way. Louise Jandura, Chief Engineer for Sampling and Caching at NASA/JPL noted that this was not the first engineering challenge that they have encountered on Mars since the Perseverance rover landed but that “when we do hit the un-paved Martian road again, Perseverance sample collection is also ready to roll.”