A glance at the graphics in the SimRefinery image above, and you know that this is an old game. It's actually an old, incomplete game that was recently discovered and made available to download and play on Archive.org. If you think that a game about an oil refinery sounds a bit odd, it wasn't meant for SimCity fans to play.

SimRefinery was a game designed in the early '90s by Maxis Business Solutions at the request of Chevron. The idea the oil company had was to use a game that took all the very complex components of an oil refinery and made them visible, just as SimCity did for the parts that make up cities. Anyone who has ever played SimCity will know what they mean. In that game, you have to create everything from the roads to the buildings to the power, water, and sewer grids. 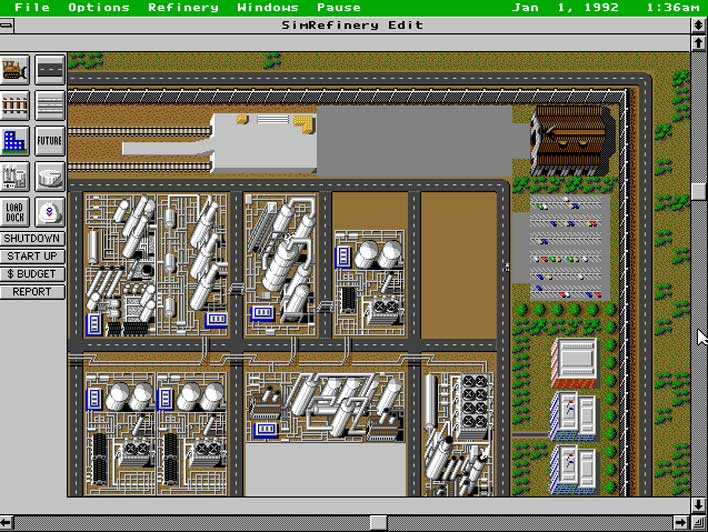 The refinery game let users create disasters, something SimCity was famous for. The game was never meant to train workers on how to operate the refinery accurately, it was more to give an overview of components in the refinery. SimRefinery was lost for a long time and was believed to be destroyed. However, a commenter on a story about the game at ArsTechnica somehow had a copy of the game on a single 3.5-inch disk. Interestingly, the commenter refused any requests to talk about the game and only said that it had been acquired from a retired chemical engineer friend that worked at Chevron in the early 90s.

The silence of the person who had what appeared to be the only copy of the game in existence seemed to be the end of the story. However, the silence was to allow the person to upload the game to archive.org for everyone to try out. It's worth noting for anyone who hops over to archive.org to download the game that it's not complete. However, it is complete enough to create disasters and see what happens when parts of the plant break. May has been a good month for vintage gamers. Another vintage video game thought to be long-lost surfaced this month with the unreleased "Days of Thunder" recently published on GitHub.