After plenty of “leaks” over the past few weeks, the LG Wing is now official. The Wing is the first product to come from LG’s Explorer Project, which aims to “discover yet unexplored concepts” to help advance the smartphone industry.

In the case of the Wing, we’re looking at dual screens. There’s a top screen that swivels revealing a smaller display underneath. This is a drastic departure from the flexible folding displays that we’ve seen on devices like the Samsung Galaxy Z Fold 2 or the dual folding displays we’ve seen with the Microsoft Surface Duo. 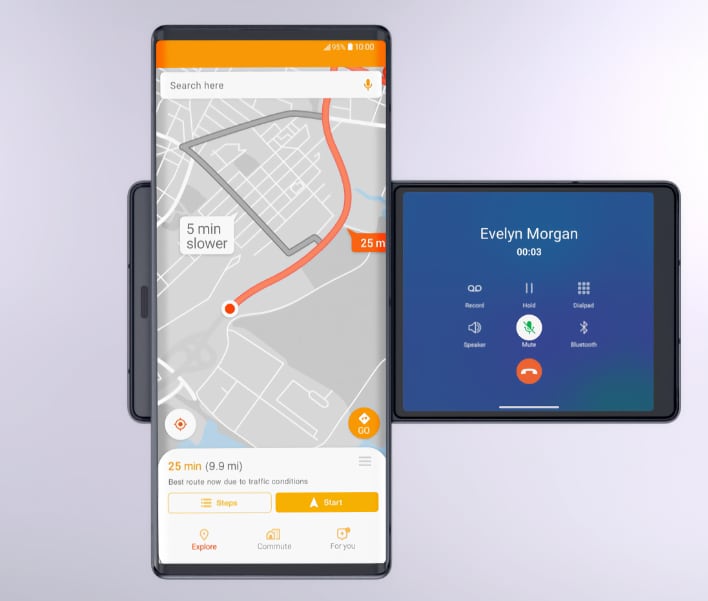 The primary display that you will be interacting with the most measures 6.8-inches across with a resolution of 2460x1080, and features a P-OLED panel with a 20.5:9 aspect ratio. When you swivel this display into a horizontal orientation (instead of its fixed portrait orientation), it reveals a smaller 3.9-inch display underneath. So, what exactly can you use these dual displays for? LG gives the example where you can have an uncluttered camera app providing a clean viewscreen with the primary display in a horizontal orientation, and the 3.9-inch display (1240x1080) giving you access to camera controls.

Another example cited is allowing the smaller display to show playback controls while you view a video on the primary display. Or in yet another example, Google Maps is uninterrupted when a phone call comes through. The phone app instead shows up on the 3.9-inch display. There are probably dozens of other usage scenarios (i.e. running two apps side-by-side), but these are the ones that LG has chosen to highlight at the moment. 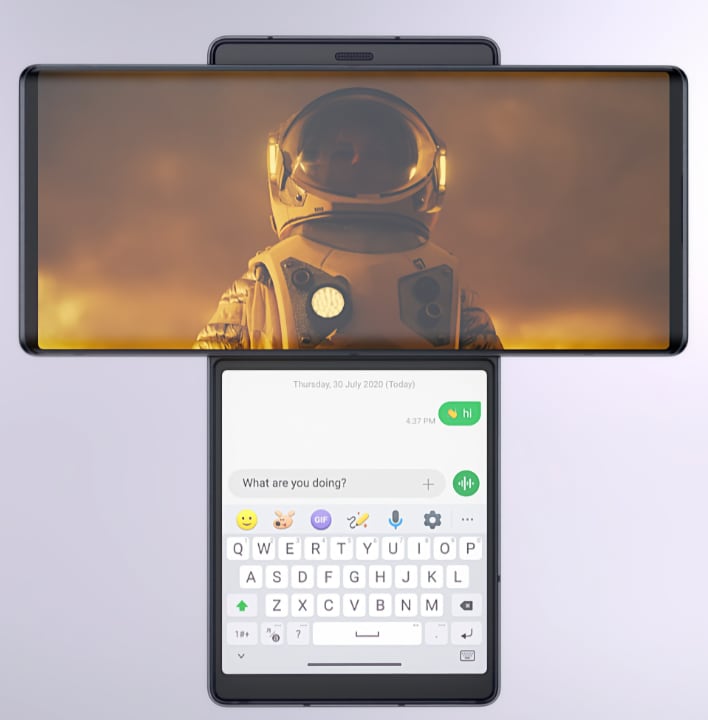 At its heart of the Wing is a mid-range Qualcomm Snapdragon 765G SoC with 5G support, 8GB of RAM, 256GB of internal storage, and a microSD slot (up to 2TB supported). You’ll find a 4,000 mAh battery onboard along with support for wireless charging. Perhaps not surprising given its hinge mechanism, the Wing does not have any provisions for waterproofing.

LG has equipped the Wing with a pop-up 32MP selfie camera, which is a rarity these days. On the back, you’ll find a triple-camera setup: 64MP primary, 13MP wide, and a 12MP ultrawide. LG even gives you the ability to simultaneously record with the 32MP selfie camera and one of the rear cameras.

The LG Wing will be available first on Verizon, and will later come to AT&T and T-Mobile. At this point, exact availability and pricing has not yet been announced.