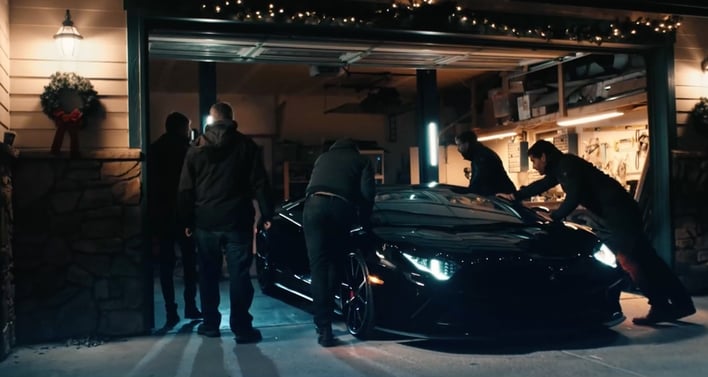 Typically, when a major automaker like Ferrari or Lamborghini learns that someone is creating an unauthorized version of one of their cars, the immediate reaction is to send out a cease and desist letter to force them to stop. That's, very surprisingly, not what has happened with the father and son team trying to build a 3D printed version of a Lamborghini Aventador.

The man building the project is a physicist named Sterling Backus. His 11-year-old son, Xander Backus, is a Forza fan and asked his dad if they could build an Aventador. Instead of blowing the boy off with a laugh, Sterling said yes, and the project began. For months the elder Backus has worked on the project to design, 3D print, and assembly a scale replica of the Lambo hypercar.

The project rolls on a custom tubular chassis and uses a twin-turbo Chevy LS motor rather than an Italian V12. When Lamborghini heard about the project, it stepped in and loaned the duo a real Lamborghini Aventador for two weeks to allow the man to get the dimensions needed to build the parts to make the replica.

Backus wrote on Facebook that Lamborghini liked the creation. He also said that the automaker liked that they weren't badging the car as a Lambo or selling parts; he says those facts are part of why Lamborghini liked the project. The project is a long way from complete at this point with no estimate on when it might be finished offered. We hope to see the completed replica in the future, and it's nice to see Lamborghini not squashing the dreams of a father and son. We first learned of this project in October.