Pong became one of the first commercially successful video games when it was released in 1972. It's a simple game with just one control input. It's so simple, in fact, that scientists at a company called Cortical Labs have grown a "mini-brain" in the lab that can play it. The cluster of neurons didn't need to be told how to play Pong—it just figured it out. It's not just about automating Pong, though. The researchers say this technology could provide a model for better understanding human diseases.

The research was conducted with both mouse and human neurons, which were cultured in the laboratory and then installed on top of HD-MEA chips that allowed the recording of electrical activity at sub-cellular resolution. They found that a cluster of about 800,000 cells was enough to handle the straightforward gameplay of Pong. It only took about five minutes for the mini-brains to start learning how to interact with the game, which was confirmed with a control of non-neural cells.

Even those born decades after Pong will have a basic understanding of the game. A ball bounces between two paddles, and your goal is to slide your paddle into its path. That makes it a common test in neuroscience research. The researchers found that when first plugged into the game, the cells expended a lot of energy, but that decreased over time as they "learned." When the ball passed the paddle, the cells would have to use more energy to recalibrate for the ball's unexpected starting position. The mini-brain would often place the paddle in the wrong place, but its success rate was greater than random chance. 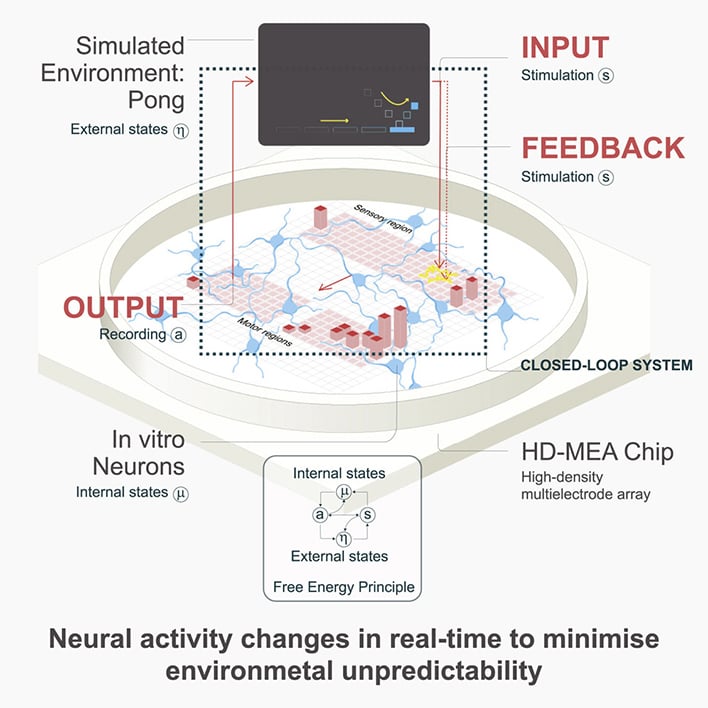 The team behind the mini-brain has used the term "sentient" to describe the system, but that might be intentionally overstating. Other scientists have suggested "thinking system" as a more appropriate term. The researchers are working with bioethicists to ensure their work does not lead to the creation of a functional mind, which would raise all sorts of existential questions. That's not the goal anyway.

Brain cells have evolved to process and output data in real time. Creating a system that taps into their true function opens up new avenues of research and models for diseases like Alzheimer's. A functional mini-brain could be modified and analyzed in ways that even a sample of real human brain tissue cannot. Thus, turning them loose on a video game like Pong could be a benchmark for comparison.