If Intel's recent estimation is correct, it will ship a whopping 4 million discrete Arc Alchemist GPUs this year. That includes laptop, desktop, and workstation models combined, but is still an ambitious goal that underscores how important Intel views the discrete GPU market, now and in the future. And to help navigate the market segment, Intel went and poached Rohit Verma from AMD.
Verma had spent the past eight-plus years at AMD, most recently as a Senior Fellow and Lead SoC Architect for Discrete GPUs in the Radeon Technology Group. He filled that role for over three years at his former employer, working as a top architect on a product stack spanning consumer (desktop cards and notebook), workstation, and cloud gaming markets.
Prior to that, he spent nearly five years as an AMD Fellow and Lead SoC Architect in AMD's Semi-Custom Business Unit (SCBU), where he led architecture designs from product conception up through product launch. 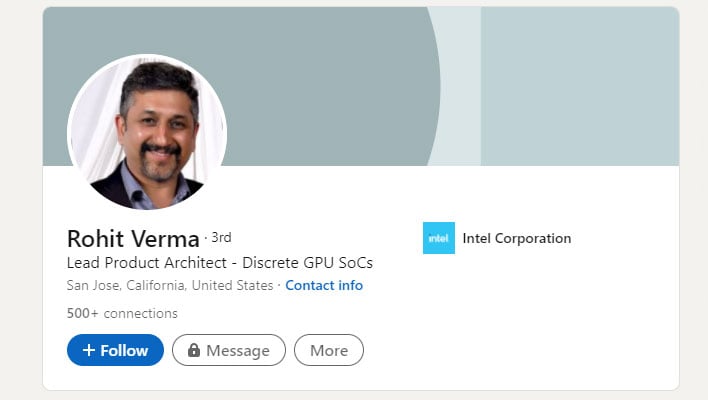 "I am excited to share that I have joined Intel to lead Product Architecture of Discrete GPU SoCs in the Visual Compute space. It's great to be back at Intel and am looking forward to working with the team to define and build innovative next generation GPU products!," Verma posted on his LinkedIn page.
Verma's departure from AMD is actually a return to Intel rather than his first stint at the company. The bulk of his career was spent as a Lead SoC Architect Intel, a position he occupied for almost 15 years (March 1999 to November 2013). So he brings both extensive experience and familiarity to his old stomping ground.
Talent poaching is common in the tech industry, some of which is more notable than others. In this case, it's worth noting that Raja Koduri, the top boss of Intel's Accelerated Computing Systems and Graphics (AXG) Group, left AMD in late 2017 as the head of the company's Radeon Technology Group, right after launching Vega. He took a short sabbatical, then joined Intel to lead its own efforts in the discrete GPU space.
Now nearly five years later, Intel will officially enter the discrete GPU market, a segment it hasn't really flirted with since shelving Larrabee over a decade ago. The first Arc Alchemist GPUs will ship this quarter in laptops, followed by desktop models in the second quarter and workstation SKUs in the third quarter.
Hat tip to Dylan Patel (@dylan522p) for spotting to poach.