Intel states they “engineer our silicon to excel in performance across the widest variety of use cases, workloads and form factors.” As Chromebooks are a mainstay in an educational setting and are making their way as work-from-home devices, the performance Intel boasts is necessary for learning and productivity. By Intel’s testing, multi-tasking and overall performance on Chromebooks has gotten a substantial lift over the prior 10th generation Core processors. 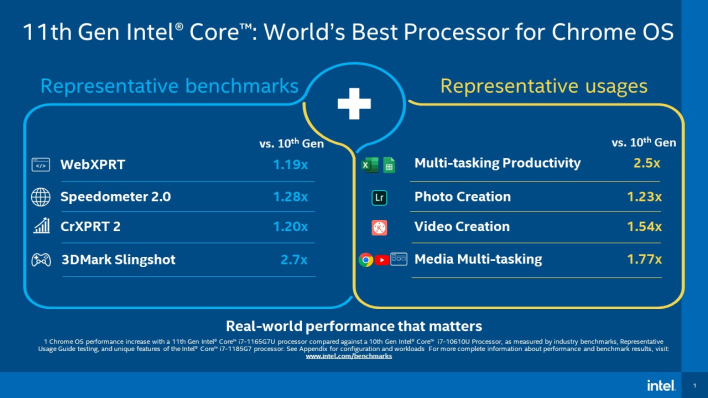 These sorts of numbers make Tiger Lake processors the “current top performing CPUs for Chrome OS,” which is quite a feat. By working together with Google, Intel is working to make the experience of the Chrome OS device great. John Solomon, Vice President of Chrome OS at Google, says that with this collaboration, users will not have to choose between performance and form factor and that Chrome OS devices will do it all in a smaller package.

No matter what, this is an exciting time to watch technology become more powerful in a smaller form-factor. Intel will be making the education and work-from-home experience that much better on Chrome OS devices. Improving productivity and learning experiences is critical in the time we live in, and Intel seems poised to continue to remain a dominant force in the Chromebook market.