Hyundai first gave us a glimpse at its latest electric vehicle when it debuted the Concept 45 two years ago. Now, the production version of that car has been unveiled, and it is a fetching design quite unlike any other EV that has come before it. Witness the Ioniq 5, which features a crisp, angle-driven look that is both simple and futuristic at the same time.

At a time when most vehicles are seeming to blur together with designs that are increasingly looking the same spin on the "crossover" concept, the Ionic 5 is a breath of fresh air. At the front of the car is a bold face with quad headlamps flanking a faux grille. Along the sides, you can see the angular design in full effect with a huge "slash" starting diagonally from just below the side view mirrors, and falling to the bottom leading edge of the rear wheel well. The quad lighting elements extend to the rear of the vehicle for the taillamps. Overall, the vehicle gives us a bit of a Cyberpunk 2077 vibe without being too overwhelming on the details. 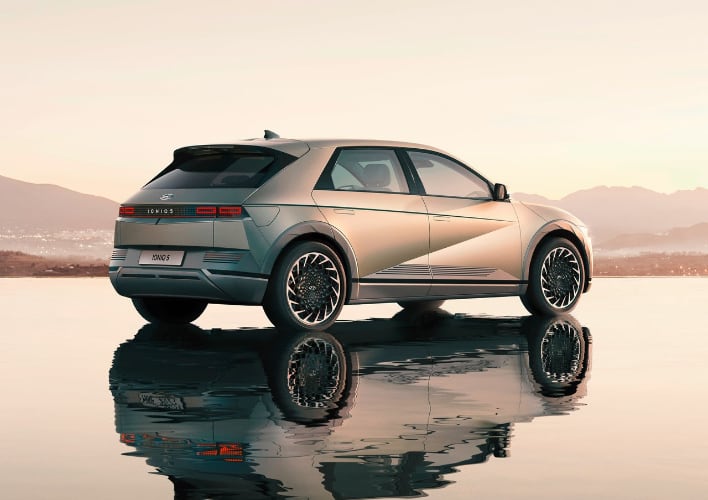 Interestingly enough, the Ionic 5 sits on a 118.1-inch wheelbase -- which is larger than Hyundai's flagship full-size Palisade 3-row crossover, yet has an overall length that is 2 inches shorter than the compact Elantra sedan. That massive wheelbase opens a wealth of interior room for the passengers, including front seats that can recline nearly horizontal to serve as a makeshift napping area. When reclined, the front seats even have small footrests that extend to support your lower legs. The rear seats can also be adjusted forward and backward as needed for additional legroom. 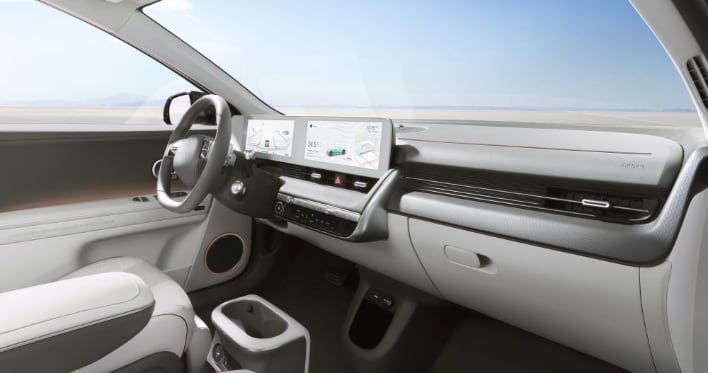 Placed in front of the driver are two large 12-inch displays which are integrated into a single glass panel. The dashboard is simple and designed in a way to maximize space available to driver and passenger (we sense a theme here). There's also a HUD that can project important information onto the windshield in front of the driver.

When it comes to the all-important drivetrain, Hyundai says that the Ioniq 5 will be available in either single-motor RWD or dual-motor AWD configurations. The former makes 215 horsepower/258 lb-ft torque and can scoot from 0-60 mph in 7.4 seconds. The latter is good for 302 horsepower/446 lb-ft torque and does the deed in 5.2 seconds. The vehicle operates on an 800-volt platform when paired with a 350-kW charger, which Hyundai says can take the vehicle from a 5 percent charge to 80 percent in just 18 minutes. 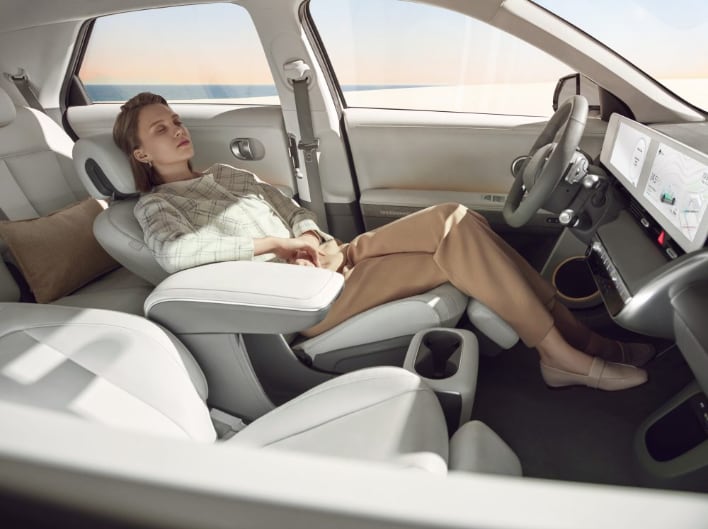 Riding on Hyundai's Electric-Global Modular Platform (E-GMP), which will be shared with Kia, the Ionic 5 can be equipped with up to a 77.4 kWh battery that has a WLTP rated driving range of 290 to 300 miles. However, based on U.S. EPA figures, that range should be more around the 275-mile range.

At this time, Hyundai has not confirmed pricing for the Ioniq 5, but we'd imagine that it will be competitive with the Tesla Model 3 and Chevrolet Bolt. While the vehicle is destined for the United States, we likely won't see it here until the latter half of 2021 or early 2022 after first launching in Hyundai's home market of South Korea.