We have seen Gundam-themed PC parts before, and none of them were really up to snuff. At an event in Japan, ASUS Republic of Gamers showed off a solid execution of the Gundam theme. A whole lineup of Gundam PC parts and peripherals were showcased, and they all look pretty slick. If you are a Gundam anime fan, you may have to go to get these parts shipped from Japan and pay a bit of markup to get them.

Recently, on social media site BiliBili, a video was posted giving people an up-close and personal look at the show's star: a Gundam-themed NVIDIA RTX 3090. ASUS ROG nailed the execution, as the NVIDIA card looks robotic, but not in an over the top and tacky kind of way. The card is largely white with red, blue, and black accents with numbers and words referencing Gundam across the front and back.

If you notice at the beginning of the video, it appears there is much more Gundam stuff to be seen. Chinese website itheat has quite a few more images from the event, and it seems there is also a red and black lineup of Gundam parts. Both lineups include cases, liquid coolers, graphics cards, motherboards, keyboards, mice, mousepads, headphones and possibly more. There are also themed monitors based on the ROG STRIX XG279Q. Even if you are not a Gundam fan, the parts still look good overall. 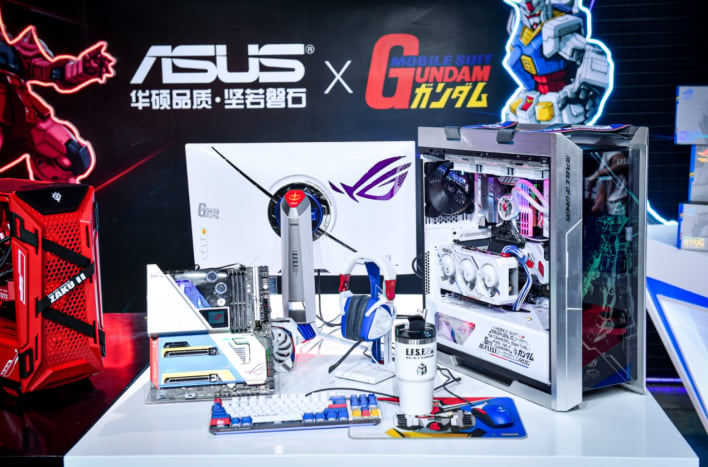 Sadly, it looks like these parts will only be available in Japan for the time being, and they come with a pretty significant markup. Twitter user @harukaze5719 tweeted a picture of what appears to be pricing for the Gundam lineup. Not pictured in the pricing seen below is the NVIDIA RTX 3090 card priced at 16,999¥ or roughly $2,543. That is a $743 markup over the ROG Strix RTX 3090 OC. If these parts' mass production started and Asus went global with the branding, we could see the price drop, but it would not be that significant. 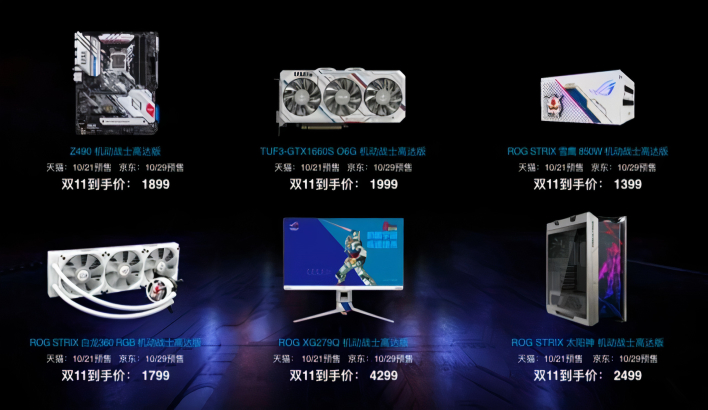 These Gundam PC parts and peripherals from ASUS look good, but they will be hard to come by and cost quite a bit. You can use services to order parts and have them shipped stateside, but that is another cost on top of the already significant markup over the original components. If you want to see these parts worldwide, be sure to tweet and message ASUS Republic of Gamers, and perhaps we will see the mecha-inspired parts soon.