What would you do if you checked your bank account and found it had been unexpectedly padded with a quarter of a million dollars? Seems like a farfetched scenario, except it actually happened to a white-hat hacker, courtesy of Google. The search giant confirmed it mistakenly paid the hacker $249,999 and—naturally—wants its money back.
His name is Sam Curry and according to his Twitter profile, he's a hacker, bug bounty hunter, and security engineer at Yuga Labs. In a recent Twitter post, Curry publicized his surprise windfall from Google and, at the time, said he had not heard back from Google several weeks after submitting a support ticket. 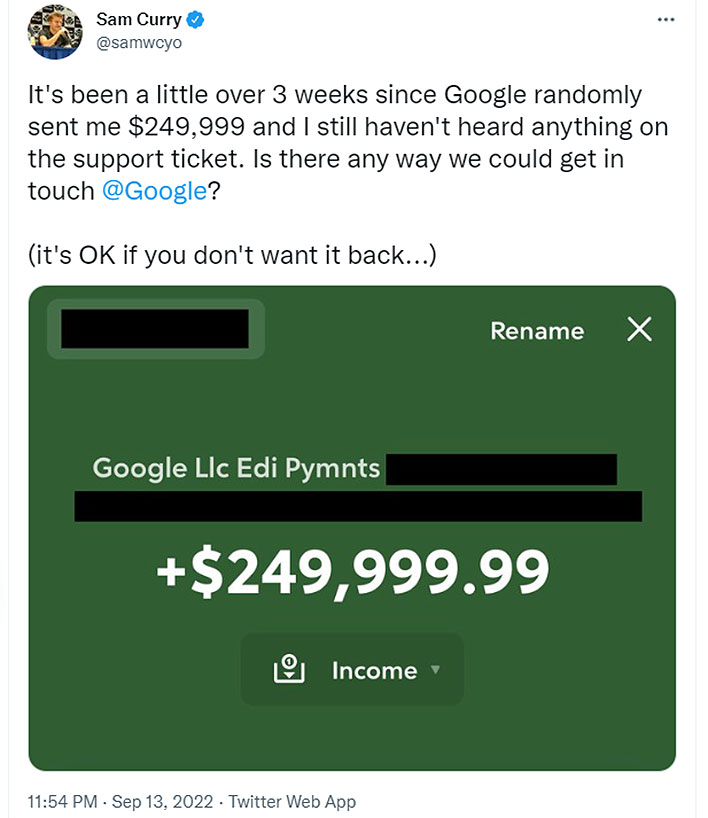 "It's been a little over 3 weeks since Google randomly sent me $249,999 and I still haven't heard anything on the support ticket. Is there any way we could get in touch @Google? (it's OK if you don't want it back...)," Curry wrote on Twitter.
That kind of green will get you some nice stuff—a new home, a swank sports car, a boat, or whatever. Instead of spending the money, in whole or in part, Curry wisely held onto the funds. He did, however, consider moving the money to a separate account for tax purposes. It doesn't sound like he'll have to, though.

In the end, Curry's hunch that Google made an expensive error turned out to be true. "Our team recently made a payment to the wrong party as the result of human error. We appreciate that it was quickly communicated to us by the impacted partner, and we are working to correct it," a Google spokeperson told NPR.
It's not clear exactly how this happened outside of it being "the result of human error." That said, Curry participates in bug bounty programs, including ones run by Google. As it applies to Android and Google devices, the maximum reward amount is $1 million, which applies to code execution flaws in relation to Google's Pixel Titan M security chip.
In any event, hopefully Google compensates Curry for the error. After all, Alphabet (Google's parent company) raked in north of $278 billion last year.