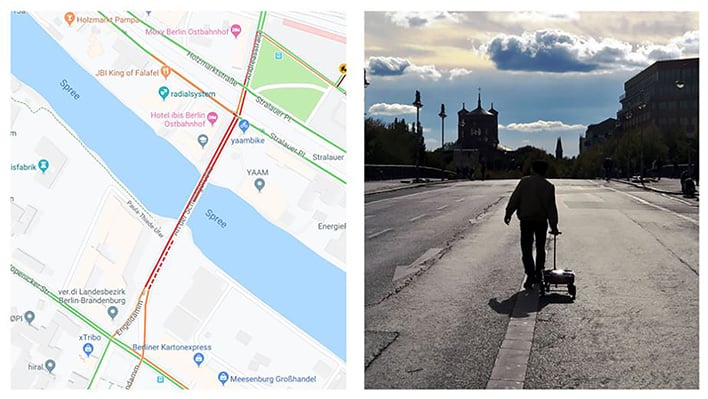 Google Maps and other related apps are part of many of our daily activities. Google Maps provides directions, information about traffic, restaurant recommendations, and many other services. However, it is also important to remember that these kinds of apps can be easily manipulated. Artist Simon Weckert recently tested the limitations of Google Maps and questioned how this tool can impact our actions and the distribution of power.

Simon Weckert is a Berlin-based artist who is particularly interested in the value of technology. For this particular performance and installation, Weckert placed 99 smartphones in a small wagon and walked across the Shilling Bridge in Berlin. The bridge appeared “green”, or relatively free from traffic, before Weckert began their trek. The bridge in Google Maps turned from green to “red”, or highly trafficked, as Weckert crossed it. Weckert noted that their performance would have likely had an immediate impact on those who were using Google Maps. Drivers may have chosen an alternate route to their destination to avoid “traffic”.

Weckert’s performance examines the role of maps in our everyday lives. Weckert remarked, “Google’s simulation-based map and world models determine the actuality and perception of physical spaces and the development of action models.” They asked how much services such as Google Maps are able to control our behavior, opinions, and knowledge of the world. They also questioned how much Google Map users are in turn able to impact the service.


These kinds of inquiries are worth consideration, especially as Google Maps continues to roll out new features. This past summer, Google allowed users to post images of food from restaurants. This simple feature could determine how much business various restaurants receive.

The potential impact of Google Maps becomes a murkier with regards to politics and international boundary lines. In 2014, it was revealed that Google Maps alters its maps to depict disputed regions. The map that you are able to see depends on your own geolocation and your region’s laws on map-making. For example, the boundary between Bhutan and China has long been a subject of debate. Some areas of Bhutan appeared under Chinese jurisdiction when the map was viewed from a Chinese location. Chinese authorities even used a map in 2017 to justify road construction in the disputed territory of Doklam. China claimed that the border had been resolved, while Bhutan stated that no agreement had been reached.

In this situation, who control perceptions of the Bhutan-China border? Does Google Maps or China control the depiction of this border? Weckert’s interesting installation makes users question how much this simple service really influences our lives.