GeForce RTX 3090 Ti Allegedly Delayed And Could Cost $4,000 When It Does Arrive

One of the many announcements NVIDIA during its CES event was the crowning of a new flagship graphics card, the GeForce RTX 3090 Ti. Not that the regular GeForce RTX 3090 we reviewed last year is long in the tooth by any stretch, but for those who want the fastest consumer GPU on the planet, the Ti model will soon occupy that space. As to how soon, apparently a little while longer than initially thought.
NVIDIA was coy about some of the details regarding the GeForce RTX 3090 Ti, including when exactly it would launch. All the company really said was that it will "crank out 40 TFLOPs for shaders, 78 TFLOPs for ray tracing, and a whopping 320 TFLOPs of AI muscle." To put those figures into perspective, the regular GeForce RTX 3090 offers up 35.6 TFLOPs in FP32, 69 TFLOPs for ray tracing workloads, and 285 TFLOPs for tensor computing.
The card is also expected to arrive with a full GA102 GPU with 10,752 CUDA cores (up from 10,496 on the non-Ti model) and 24GB of GDDR6X memory at 21Gbps, on the same 384-bit memory bus. That faster memory, however, will push the memory bandwidth to just over 1TB/s (up from 936GB/s).
Rumor has it the card was originally intended to release to retail sometime this month. However, multiple sites claim to have 'confirmed' with their sources that NVIDIA has asked its add-in board (AIB) partners to hit pause on producing custom models. It's not clear why (if it's even true), but there's speculation that NVIDIA is taking extra time to massage the BIOS and/or revise the hardware requirements for custom PCBs. We could be looking at a February release instead (so not much of a delay).

Prior to NVIDIA's official unveiling at CES, a photo of a supposed ASUS TUF Gaming GeForce RTX 3090 Ti retail box made the rounds on the web. ASUS is just one of several partners that will be cranking out new flagship cards, though. 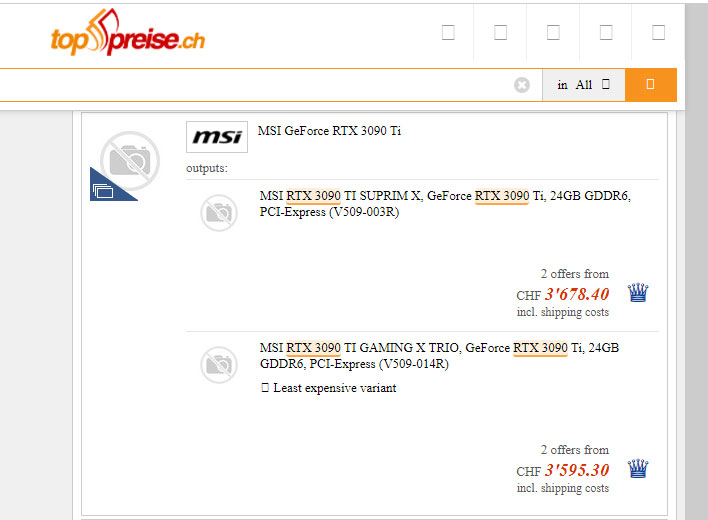 A couple of MSI product listings showed up at a Swiss retail site with eye-popping price tags. The site is currently down, but a cached copy reveals the retailer had listed two custom models from MSI, the RTX 3090 Ti Gaming X Trio priced at 3,595.30 Swedish Francs and a Surpim X variant priced at 3,678.40 Swedish Francs. Those prices work out to around $3,934 and $4,025, respectively, in US currency.
We don't want to read too much into those prices because the new flagship card hasn't actually released to retail yet, and the sample size is just a single retailer. On top of that, prices in one territory don't always neatly convert to another based on the current exchange rate.
That said, we fully expect the GeForce RTX 3090 Ti to be expensive. For reference, the GeForce RTX 3090 has a $1,499 MSRP, with several custom models commanding over $2,000. On Best Buy, for example, the ASUS ROG Strix GeForce RTX 3090 Gaming model is priced at $2,299.99. And like every other GPU, we also expect it to be sell out quickly, regardless of price.