NVIDIA's flagship GeForce RTX 3090 is already boss, and that was before Galax kicked things up a notch by slapping an LCD display and crown on top of the thing. But hey, why stop there? For spits and giggles, someone thought to flash the card with a 1,000W BIOS, without swapping the custom three-fan air cooler for a liquid or LN2 solution. So, how did it go?
Well, it did not go up in flames or otherwise get destroyed, if that is what you are wondering. Nor should it—what flashing to a 1,000W BIOS basically accomplishes is to remove the power limit ceiling, so that the card can maintain a boost clockspeed for a longer period of time. It can also facilitate higher and more stable overclocks, within the limits of the cooling solution.

Whatever, it's all about the journey and not necessarily the destination, right? You can go along for the ride if you wish...


Let's talk about the card. The Galax GeForce RTX 3090 Hall of Fame (HOF) is a limited edition part with a premium price tag (even more premium than the RTX 3090 itself, if you can even find one in stock). It sports a custom 12-layer white PCB with top shelf components, and comes out of the gate with a factory overclock. When it came out, the card promptly set 16 world records (albeit with extreme cooling and aggressive end-user overclocks).

For this neat little experiment, the overclockers at YouTube channel  二斤自制 goosed the card to 1,845MHz at a 420W TGP. In doing so, the card reached a temperature of 69C with the fans running at 64 percent. Not too shabby.
After flashing to a 1,000W BIOS (probably from EVGA, which has one available for its Kingpin card), they were able to hit 2,000MHz, while drawing 630W of power. This caused in a spike in temperature, which rose to 96C. That's a big jump, though considering they stuck with the custom air-cooled solution, we have to tip our hat at the effort.

Should you try this at home? Definitely not. First, imagine spending north of $2,500 for a graphics card, then flashing to a 1,000W BIOS and keeping the air cooler intact. Yikes! But assuming you take the risk, there is not a whole lot to gain, in terms of performance. 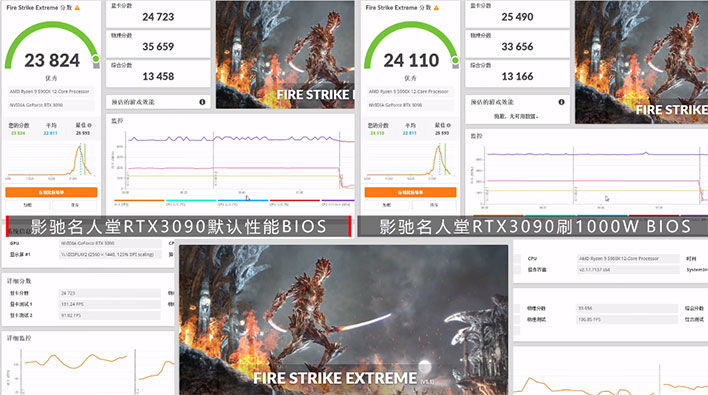 The insane BIOS flash just did not net much in the assortment of benchmarks they ran. For example, in 3DMark's Fire Strike Extreme test, the 1,000W BIOS and faster clockspeed resulted in a whole 1.2 percent performance gain, going from a score of 23,842 to 24,110. That's underwhelming, to say the least.

There was a bigger improvement in Fire Strike Ultra, which saw the score jump from 13,140 to 13,740, but that still amounts to a less than 5 percent improvement. Actual games exhibited similar nominal gains. That's because for all the added headroom the 1,000W BIOS potentially provides, sticking with air cooling only allowed a small overclock in GPU frequency. Overall, they note around a 2-3 percent performance gain on average.
To really take advantage of something like this, a better cooling solution is needed. Practicality goes out the window pretty quick, though, because a 1,000W BIOS is not going to fully stretch its legs until using LN2 cooling. Still, it's a fun experiment for someone else to run, and we applaud their effort.