While people cannot go out and about with friends to events or to catch a movie, anyone can sit inside and play some video games. According to metrics collected by SuperData, that is precisely what many people did. It turns out that in November, digital games earned $11.5 billion, which is the highest monthly revenue ever. With the data gathered, the most popular game ever in terms of monthly players has been found, and it likely is not a one you would guess.

Gaming is a great option to remain entertained and can provide multiple hours of content continuously. Moreover, new consoles and computer parts hit the market in November, creating a spike in game sales. You can see where top games fell when it came to sales in the chart below. 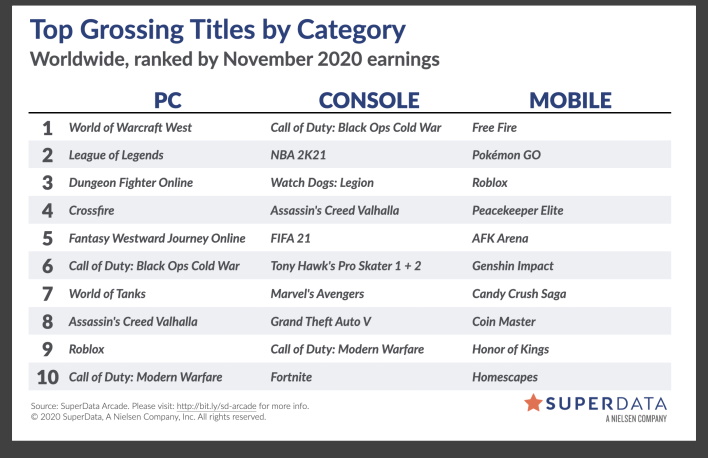 Overall, it was found that mobile gaming earnings are up 9% while PC gaming earnings are up an impressive 22%, which sets a “new revenue record” according to SuperData.  Console earnings were up 24% but ended up slightly below the all-time record set in April of this year. The theory is that a limited supply of consoles this year may have hampered game sales. People were likely waiting to get a new console before they bought a game, so they did not buy the game when they could not get a new console. As it turns out, though, none of that mattered for the most popular game ever, and it was not even on the top-grossing chart.

SuperData reports that with half a billion players in November, Among Us, is “now by far the most popular game ever in terms of monthly players.” Among Us is not a heavily monetized game (loot boxes and the like), and it only costs $5 on PC, so earnings are significantly smaller than the bigger games that made the chart up above. Moreover, the PC version of Among Us accounted for 64% of revenue from August to November, though only having 3% of the total player base recorded.

Ultimately, Among Us being an incredibly popular game is not surprising but being the “most popular game ever in terms of monthly players” is a little shocking. It is also interesting to see the video game market thriving amidst a pandemic where several other entertainment platforms are struggling. Perhaps we will see video games become a more substantial entertainment medium over the next few months as more people get involved.