As a general rule of thumb, perhaps it is best not to tweet vile things at other people as it could have extreme consequences. A Fortnite team has seemingly learned this the hard way as one of their players had some harsh words about Epic Games Creative Director and Fortnite director Donald Mustard. Subsequently, the team was booted from the ongoing Fortnite Champion Series (FNCS) tournament.

The tweet, which came from Fortnite player Wrigley, whose account is now deactivated, said, “Like literally f**king k!ll your$elf @DonaldMustard." Afterward, fellow teammate @DlCTATING on Twitter shared what appeared to be an email from event admins explaining that the team was disqualified and removed from the tournament because of Wrigley’s tweet. 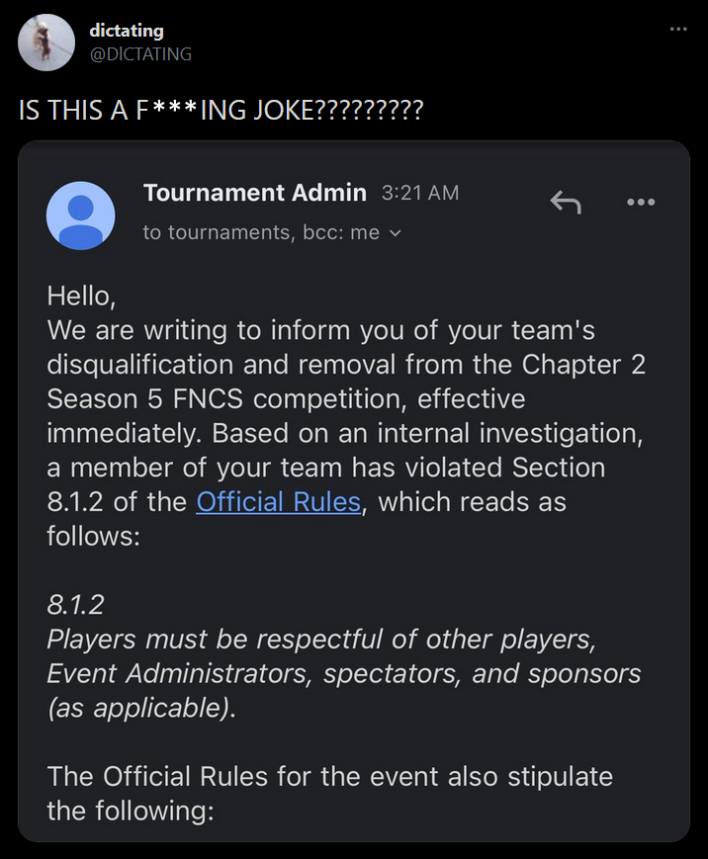 Though they found themselves at the bottom of the leaderboards, the team, consisting of Dictate, Userz, and formerly Wrigley, would have received some amount of prize money after grinding the season out according to Eurogamer. In any case, both Dictate and Userz will not be put down by the situation and appear to be looking forward to the future, even with a new player on the team.

Ultimately, perhaps it was a bit harsh to punish an entire team for what one player said as it was out of the control of others. On the other hand, an example likely needed to be made for the other tournament participants. But at the end of the day, everyone should know to be respectful to others. In any case, do you think the Fortnite event admins were harsh, or did they handle this properly? Let us know what you think of the situation in the comments below.