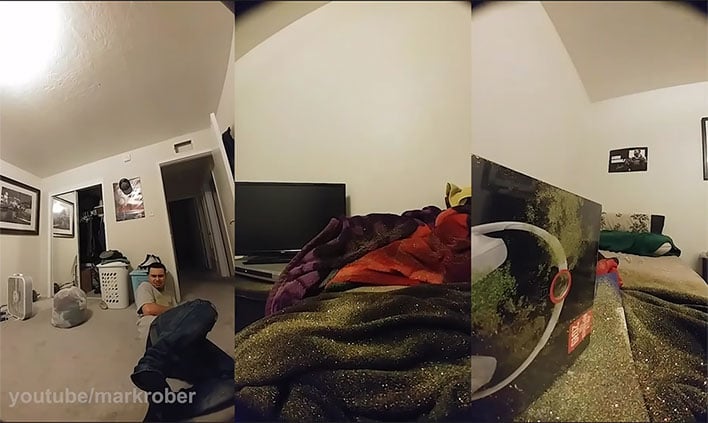 A former NASA engineer who exacted revenge on thieves last year by booby-trapping seemingly innocuous packages of expensive electronics with an exploding mess of glitter is back at it again. His hilarious mission to gift porch pirates a serving of instant karma does not disappoint, at least for those of us who get to view the glittery carnage.
His name is Mark Rober, and around this time last year, he posted a video of unsuspecting thieves stealing packages from people's doorsteps. The brazen porch pirates thought they had pilfered some pricey loot. However, Rober used his engineering skills to devise fake packages that, once opened, would spray a bunch of messy glitter all over the place. Adding insult to injury, the packages would also emit a nasty fart spray.
Some of the reactions gave Rober cause to believe they were not genuine, and so he removed them from the video. However, he insists the ordeal was not staged, and that the reactions that remained were in fact legitimate. Presumably that is the case this time around, too.

Unfortunately, package theft is not an uncommon occurrence. According to Rober, a whopping 1.7 million packages get stolen or go missing each day. The holiday season is a prime time for porch pirates to come out of the woodwork, because so many people are ordering gifts (for other people or for themselves). Combined with the fact that delivery personnel often leave packages on doorsteps, it creates a tempting situation for unscrupulous individuals.
For this year's prank, Rober redesigned the mechanics of the bait package. He spent the last 10 months upgrading the trap, culminating in a complete redesign of the package to make it more streamlined and secure. Four smartphones sit inside, which track the package's location and provide video from nearly every angle.
Fundamentally, though, it's the same ruse—once opened, glitter shoots out everywhere. This time around, Rober is using biodegradable glitter. He's also using a much more potent fart spray, as actor and inspiration for this rouse Macaulay Culkin hilariously attests in the 18-minute video. Sound effects, including fake police chatter, round out the karmic prank.
It's unfortunate that this sort of thing is such a widespread problem (though it's also encouraging that several people caught on video took steps to secure packages for others, rather than stealing them). Even surveillance video is not enough in some instances, because some porch pirates take appropriate precautions, such as covering their faces. Kudos to Rober for doling out a bit of justice to the jerks who steal from others.