EVGA's new GeForce RTX 3090 Kingpin Hybrid Gaming graphics card (24G-P5-3998-KR) is, in a word, boss. It is also expensive, which comes as no surprise—the GeForce RTX 3090 is NVIDIA's flagship Ampere card for consumers (basically this generation's Titan RTX), and the Kingpin Hybrid Gaming edition kicks things up a notch with an all-in-one liquid cooler attached.
This is basically for people who not only want the best of the best, but the best of the best of the best, if you can follow all that. And for extreme overclocking attempts.
Serving as the backbone is a 12-layer printed circuit board powered by an "extreme power design with extreme overclocking in mind." It sports integrated "Smart Power Stages," each one capable of supplying continuous current, and a 23-phase VRM that matches or exceeds the best available for the GeForce RTX 3090. 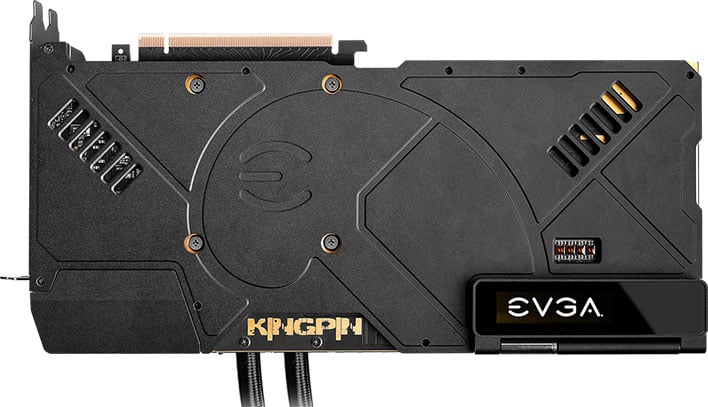 The card also boasts a digital power solution controlled by software that EVGA says is "more precise and accurate, giving you ample power to push this card to the limit." Note that you will need three 8-pin PCIe connectors to power this beast.
There is an OLED monitor display on top with a 176x48 resolution, which lets you keep track of certain vitals. And unlike most other cards, there are integrated headers for monitoring voltages in real time, along with three onboard BIOSes to choose between Normal, OC, and LN2 modes, depending on what you are trying to accomplish.
The closed loop liquid cooler that is attached features a 360mm radiator and three fans. This is a first for an EVGA graphics card, including past Kingpin models with hybrid coolers.
Now, about that price. This thing commands $1,999.99, which is $500 more than the Founders Edition. But hey, if you are after the top Ampere part, this is it.