The Tesla Bot could be lumped into the same category as the Boston Dynamics Atlas at a basic design level. They're both bipedal robots that are shaped and sized similarly to humans. However, the Tesla Bot has more streamlined and human-like proportions -- or at least that's what Tesla's concept renders show currently.

According to Tesla, the robot will stand 5' 8" tall and weigh 125 pounds. In addition, it will be able to carry up to 45 pounds (10 pounds with its arms extended) and deadlift 125 pounds. Finally, Tesla Bot will be capable of running at up to 5 mph.

Tesla Bot has 40 electromechanical actuators, including 12 in the arms, 2 in the neck, 2 in the torso, 12 in its hands, and 12 within its legs. In addition, its feet operate on 2-axises and provide force feedback sensing. Its body is made of unspecified lightweight materials, while its "face" will feature a display screen for "useful information." 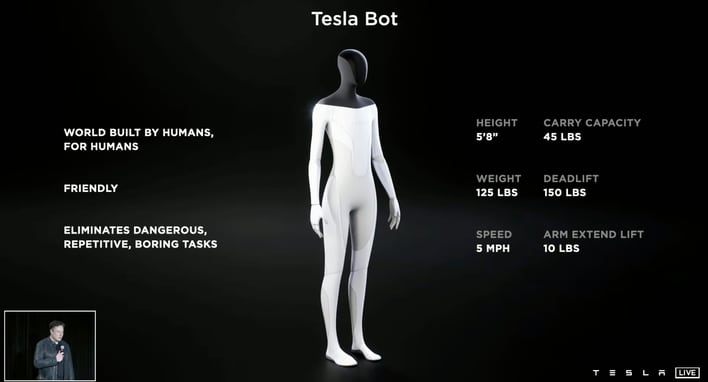 Musk stated that the purpose of the Tesla Bot program is to develop a "humanoid robot capable of performing tasks that are unsafe, repetitive or boring" to humans. "I think essentially in the future, physical work will be a choice. If you want to do it, you can," said Musk.

Before you get any ideas from the movie, I, Robot, where incredibly powerful USR robots are capable of breaking bones and even killing humans, Musk says that Tesla Bot is "intended to be friendly." However, he also went on to say that in the event of a robot uprising, "you can run away from it, and most likely overpower it." 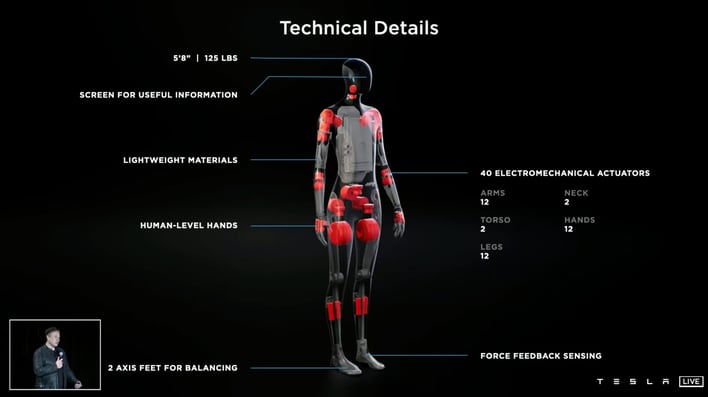 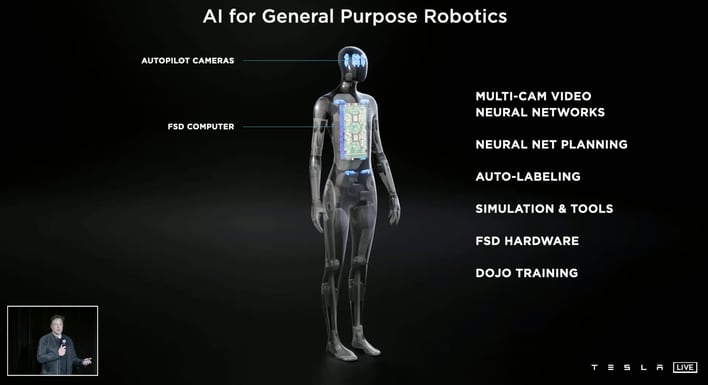 Purposefully "detuning" the physical capabilities of the Tesla Bot (like its limited lifting capacity and top speed) seems in keeping with that mantra.

The Tesla Bot is currently in the concept phase at Tesla, and Musk stated that a working prototype would arrive sometime in 2022. However, given Tesla's penchant for delays with its critical vehicle programs, we wouldn't be surprised if that date gets pushed back to 2023 or beyond.