Elon Musk first unveiled the Tesla Semi way back in November 2017, and plans for the revolutionary vehicle have been in a holding pattern since then. However, Musk revealed in an email that went out to Tesla employees over the weekend that it’s time to kick production into gear to start fulfilling the immense number of preorders that it has received.

“It’s time to go all out and bring the Tesla Semi to volume production,” said Musk in the memo that was seen by CNBC. “It’s been in limited production so far, which has allowed us to improve many aspects of the design. Production of the battery and powertrain would take place at Giga Nevada, with most of the other work probably occurring in other states.”

Musk then confirmed the authenticity of the memo with a one-word tweet:

The Semi is quite unlike any other long-haul vehicle currently on the market, as it is powered by a massive battery pack and electric motors. The vehicle features four independent motors on the two rear axles and can be had with either a 300- or 500-mile range. Tesla says that the Semi can reach 60 mph in 20 seconds when fully loaded (80,000 pounds), but we’ve seen the vehicle hauling ass unladen and it’s quite a sight to behold (0-60 in 5 seconds). The company also claims that its upcoming Megacharger network will allow the extended-range Semi to sustain a charge enough for 400 miles of range in just 30 minutes.

The price for the base, 300-mile Semi is $150,000, while the 500-mile range version is priced at $180,000. Following the vehicle’s initial unveil, Tesla secured a number of high-profile orders from logistics company J.B. Hunt Transport Services and Walmart, among others. 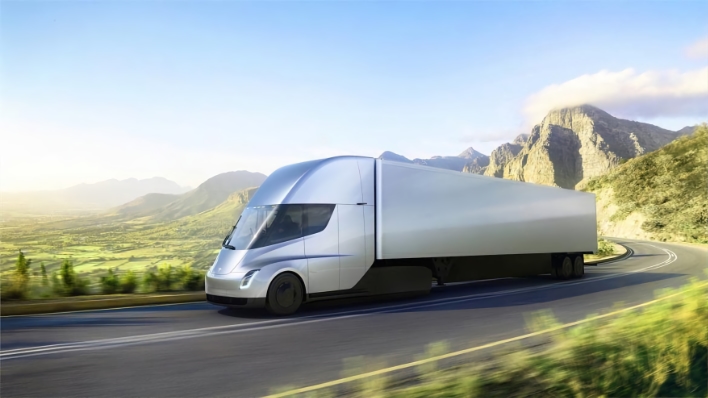 In other Tesla news, the company today crossed the $1,000/share mark for the first time ever, making it the most valuable car company on the planet with a market cap of $188.71 billion compared to $179 billion for second-place Toyota. It’s interesting to note that TSLA hit a low of $361/share back on March 10th when the COVID-19 craziness first kicked off. However, the stock has rebounded magnificently since then to its new high.