If you're a fan of gaming challenges performed by streamers then, wow, do we have an impressive feat to share with you. MissMikkaa, an Elden Ring streamer, managed to defeat Malenia at level one, using a dance pad.

Elden Ring is, of course, designed to be played with analog sticks on a controller or with a keyboard and mouse, not a dance pad. MissMikkaa's accomplishment took quite a bit of time, skill, and endurance. Defeating Level One Malenia using a dance pad took her 553 attempts over the course of 15 hours. She proudly notes that she only used 4 healing flasks to secure victory in the triumphant run. 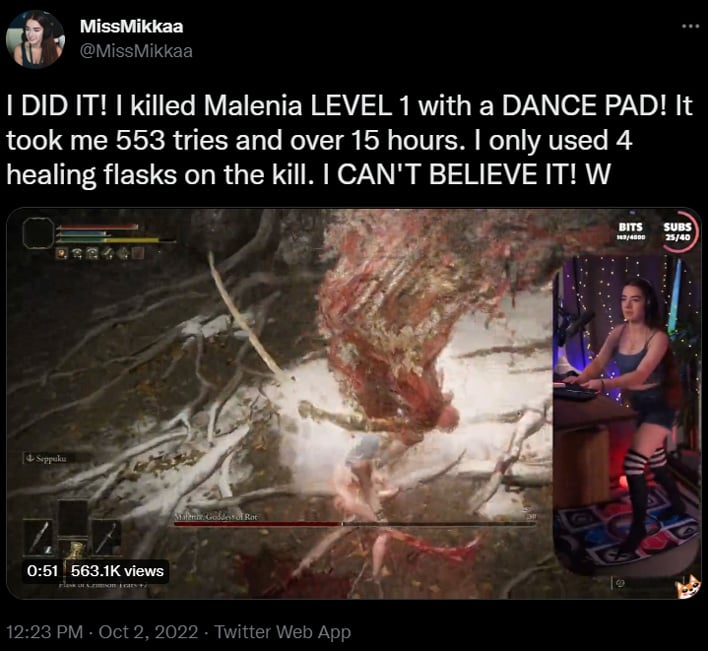 Of course, MissMikkaa immediately followed up her Tweet celebrating the accomplishment pointing out that, on that same day, she was still streaming and would be moving on to the next boss, Maliketh. She has also uploaded a YouTube video showing the entire successful fight, embedded below.

Gaming challenges involving unconventional controllers are nothing new. Rhythm game controllers are a particular favorite. For example, streamer Benjamin "Bearzly" Gwin beat all of Dark Souls using an Xbox 360 Rock Band controller. There are people beating or attempting to beat games using the DK Bongos from the GameCube Donkey Konga series. Other odd controller feats and world records include beating Super Mario Bros. 3 as fast as possible using the classic Nintendo Powerglove, a feat two streamers have completed, David "GrandPooBear" Hunt in 2018, and Mitch "mitchflowerpower" Fowler in 2020. Despite the act being implied in the 1989 film "The Wizard," there were never any world records until these two completed the task.

We want to congratulate MissMikkaa on this accomplishment. We also wish her luck in defeating Maliketh, we're not sure how the battle will compare, but we know it will be difficult and just as endurance and patience-testing as defeating Malenia. We're also wondering what other controllers people are trying to beat Elden Ring with, after all, there seems to be a theme.

Show comments blog comments powered by Disqus
Follow Us:
Your Next PC Platform?