A lot of people go into FromSoftware's games with the wrong ideas about what they're all about. Titles like Dark Souls, Bloodborne, and now Elden Ring are often described as online action RPGs, but that's not really accurate. The games do have online multiplayer components, but in actuality they are primarily single-player RPGs where you can briefly interact with other players.


In these games, the multiplayer elements are quite different from what western audiences usually expect. In western games, typically players will join and stay together until they elect to part, but in FromSoftware's games, you can only summon players into your own world for brief stints, usually until you clear an area or defeat a boss, at which point all other players are removed from your game. 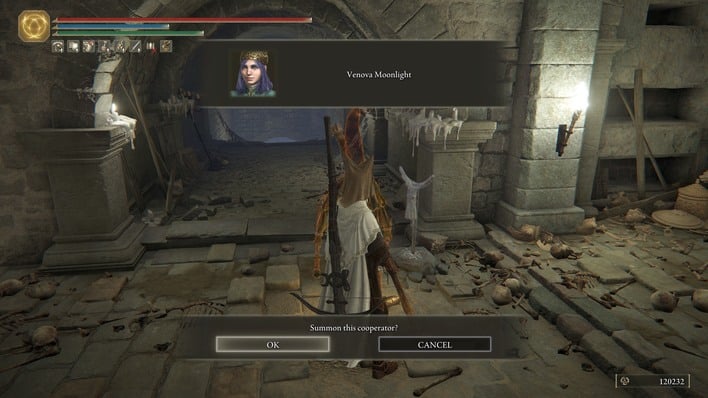 By selecting "OK," I can bring this player into my game world temporarily.


This isn't some limitation or flaw in these games, but rather a completely intentional design decision. The worlds of these action-RPGs are extremely hostile, and being able to have a friend around at all times would be a stabilizing force that would go a long way toward neutering the anxious atmosphere of apprehension that FromSoftware wants players to feel in its games.


Still, some players argue that you really can do most or all of these games in co-op mode if you want, it just involves a lot of time-consuming re-connecting, as well as forcing both or all players to do each part of the game over again for every player cooperating. Many players, especially those who have joined the series just recently with Elden Ring, have expressed the desire for a more traditional cooperative multiplayer mode. Well, if that's your desire, expert FromSoftware game modder LukeYui (creator of the popular BlueSentinel anti-cheat mod for Dark Souls III) may just have the cure for your sickness.

To be clear, the mod isn't completely new, and it also isn't out yet. LukeYui first showed off the mod back at the beginning of the month. However, as you can see in the video above, it's making great progress and looks to be just what the doctor ordered for folks who simply want to play Elden Ring in cooperative mode without all the constant re-summoning that is usually required.

As with any Elden Ring mod, it requires playing "offline," which means "while not connected to the FromSoftware official Elden Ring servers." This means you won't be able to include other players beyond your friends, but it also means you won't be invaded by hostile players, either. Everyone playing together with the mod is considered a "Host of Fingers," which means that progress is synchronized for all players, so you don't have to re-play sections over to allow players to continue to progress in the game.

The latest update video demonstrates a few of the new features added to the mod, including a vote system for synchronized fast travelling as well as shared map waypoints and a spectator mode. LukeYui hasn't said when he plans to release the mod, but it's likely that it will be announced on his YouTube channel when he does.