Apple has teamed up with a handful of states to roll out digital driver's license and state ID support for the upcoming iOS 15 software update. iOS 15 will likely launch later this month with the iPhone 13 family and supports devices dating back to the first-generation iPhone SE and iPhone 6s/6s Plus.

With this new feature, iPhone users will be able to, for example, easily add their driver's license to the Apple Wallet. The process is similar to how you currently add a credit card to the Wallet in that you'll first need to scan the front of your driver's license with your iPhone's camera. You'll also be required to take a selfie and complete a "series of facial and head movements" during setup. After these steps are completed, the issuing state will verify the data, which will allow the driver's license to show up in your Wallet.

With a stored driver's license or state ID, you'll be able to tap your iPhone (or Apple Watch) on an identity reader at TSA checkpoints. Users will see on-device what information is being requested by the TSA and "only after authorizing with Face ID or Touch ID is the requested identity information released from their device, which ensures that just the required information is shared and only the person who added the driver's license or state ID to the device can present it." 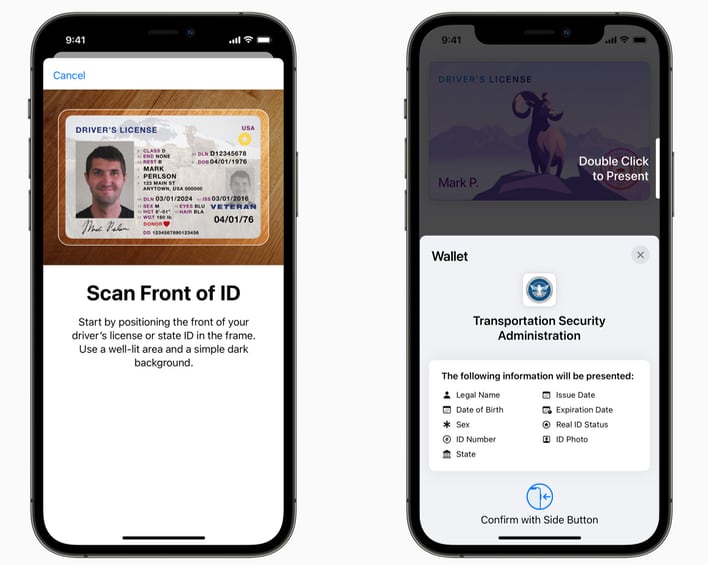 With the shift to digitized forms of identification, there are, of course, questions surrounding privacy. For those with concerns, Apple provides this guidance:

According to Apple, Arizona and Georgia are the first states to jump on the new digital ID bandwagon. However, those two states will eventually be joined by Connecticut, Iowa, Kentucky, Maryland, Oklahoma, and Utah.

"The addition of driver's licenses and state IDs to Apple Wallet is an important step in our vision of replacing the physical wallet with a secure and easy-to-use mobile wallet," said Jennifer Bailey, Apple's VP for Apple Pay and Apple Wallet. "We are excited that the TSA and so many states are already on board to help bring this to life for travelers across the country using only their iPhone and Apple Watch, and we are already in discussions with many more states as we're working to offer this nationwide in the future."

"This new and innovative mobile driver's license and state ID initiative with Apple and states around the country will enable a more seamless airport security screening experience for travelers," added TSA Administrator David Pekoske. "This initiative marks a major milestone by TSA to provide an additional level of convenience for the traveler by enabling more opportunities for touchless TSA airport security screening."

While the support for digitized driver's licenses and state IDs will debut with iOS 15, it's up to each state to "turn on" the functionality on their own timetable.