By now you are probably aware that there is a quirk in Cyberpunk 2077 that prevents it from taking full advantage of certain AMD Ryzen CPUs, by not properly leveraging simultaneous multi-threading (SMT) support, for whatever reason. As we wrote about over the weekend, there is a fix involving a simple change made with a simple HEX editor utility. Or you can try out a new mod, which has certain advantages over the HEX editing route.
The mod is supposed to address multiple performance issues, including the SMT situation on Ryzen processors, as well as "minor performance fixes." In addition, it will still work when the game is updated by CD Projekt Red. If you use a HEX editor to tweak the Cyberpunk 2077 executable, you will have to make the same edit each time there is an update (until CD Projekt Red fixes the SMT issue itself). So in that sense, this mod is a bit more convenient.

Here is the list of fixes from the mod...
According to modder Yamashi, who made the mod available on NexusMods, it does not edit the game files so you do not risk corruption or having to perform a repair. We have not tried it ourselves, but we have evaluated the HEX edit method, and quite frankly, the results were more significant than we expected. In a system powered by an 8-core AMD Ryzen 7 3700X, our own Ben Funk saw a roughly 11 percent gain in framerates after making the change, with better SMT handling at play. Have a look (and note this data is from the HEX edit, not the mod)... 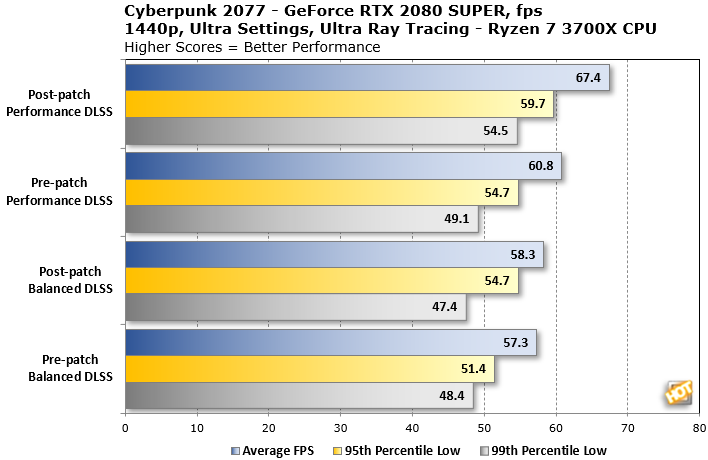 Minimum framerates also saw a jump. The bottom line is, if you own a Ryzen processor, we recommend either making the HEX edit or giving the mod a go, to make sure you are getting the most performance possible out of your system. Incidentally, Intel systems are not affected by this apparent bug.
Installing the mod is rather easy. All you need to do is grab the open source files and drop them into your Cyberpunk 2077 install folder. If you bought the game from Steam, that would be \steamapps\common\Cyberpunk 2077\bin\x64. Then load the game and you are good to go.