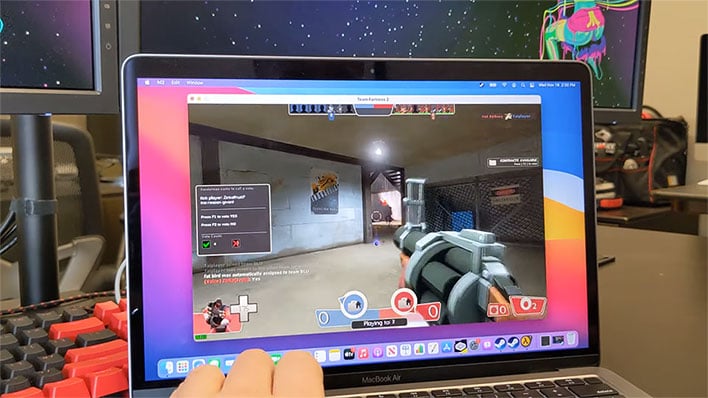 Apple is gambling on itself and its ability to design custom silicon for its entire range of Mac devices, as part of a two-year plan to transition away from x86 Intel CPUs. To get things started, Apple recently introduced a new MacBook Air, 13-inch MacBook Pro, and Mac mini, all powered by an M1 system-on-chip based on Arm. Early looks at the MacBook Air have left many people impressed. Equally intriguing, however, is an unofficial demonstration of an M1-powered MacBook Air running running Team Fortress 2 via CrossOver.
If you have not heard of it before, CrossOver is based on Wine, a free and open source compatibility layer designed to allow Windows programs to run on Linux. There are versions of CrossOver, developed by Codeweavers, available for Linux, Mac, and Chrome OS. While technically not an emulator, CrossOver for Mac "does the work of translating Windows commands into Mac commands so that you can run Windows software as if it were designed native to Mac."
Anxious to see how its latest release would work, the folks at Codeweavers bounced into their local Best Buy and picked up the cheapest version of the new MacBook Air they could find, and promptly installed CrossOver 20.0.2 on it.
"We also installed the beta version of Big Sur 11.1, because we know it has some critical fixes to Rosetta. After we did that, we were able to fire up CrossOver and install and run a wide range of Windows applications," Codeweavers stated in a blog post.
Those applications included Quicken, the desktop version of Among Us, The Witcher 3, and Team Fortress 2, the latter of which they demonstrated in a YouTube video that is a little over two minutes long. Have a look...

It gets choppy at some spots and the "FPS is all over the place," but it is pretty remarkable that it even runs in the first place, and is stable. As pointed out by Jeremy White, the founder and CEO of Codeweavers, this is "Intel x86 code being run win Wine through Rosetta 2."
"That's incredible when you consider that we're on literally the cheapest Apple Silicon device you can buy—one that gets thermally throttled and is missing a GPU core. I can't tell you how cool that is; there is so much emulation going on under the covers. Imagine—a 32-bit Windows Intel binary, running in a 32-to-64 bridge in Wine / CrossOver on top of macOS, on an ARM CPU that is emulating x86—and it works! This is just so cool," White added.
We have to agree, that is cool indeed. And it bodes well for Apple's gamble on itself. The M1-powered MacBook Air is garnering positive reviews and impressions, and it should only get better from here.