The developer behind Cyberpunk 2077, one of the most highly anticipated games of the year, is not keen on people streaming and spoiling the game's content before its official release date. So much so, in fact, that CD Projekt Red issued a warning on Twitter, saying it is going to send armed, tactical Max-Tac (or Psycho Squad) agents "after everyone who does."
Not really, of course—those who defy CD Projekt Red and stream the game before it actually launches will not actually have a Max-Tac operative storm through their doors with riot gear and the whole nine. Max-Tac is a fictional sub-group of major police forces in the game, and not a real-life entity that bothers itself with spoilers. I think.

That said, there is a bit of a veiled threat in the developer's warning. While CD Projekt Red does not come right out and say it, there is the possibility of DMCA take-down notices, and being put on the developer's naughty list, the latter of which could have future implications for streaming partners.

Here's the message in full... 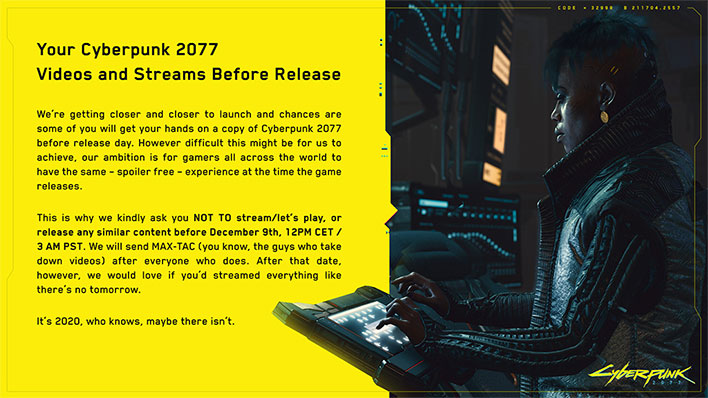 "We're getting closer and closer to launch and chances are some of you will get your hands on a copy of Cyberpunk 2077 before release day. However difficult this might be for us to achieve, our ambition is for gamers all across the world to have the same -- spoiler free -- experience at the time the game releases," CD Projekt Red said.
The developer goes on to "kindly ask you NOT TO stream/let's play or release" any spoilers ahead of the game's December 12 launch.
"We will send Max-Tac (you know, the guys who take down videos) after everyone who does. After that date, however, we would love if you'd streamed everything like there's no tomorrow. It's 2020, who knows, maybe there isn't," the developer added.
The message drew some criticism on Twitter. One user chastised CD Projekt Red for saying, "kindly ask" followed by a threat of sorts. "Please use proper language and/or learn what 'kindly ask' means. If you kindly ask I can kindly decline."
Another user called the message "gross" and accused the developer of "attacking internet content creators."
Who knows what the actual implications are, and specifically if CD Projekt Red is going to actively monitor for early streams. Clearly, though, it would greatly prefer if people waited. The challenge is that some people received their copies early, the result of Best Buy breaking the street date. That is not the fault of the customer, but the retailer, which is where the Max-Tac agents should be directing their ire.