You probably thought you were done with brain-jarring algebra and trigonometry from your school days but that may not be the case, thanks to some legal lunacy out of California. New energy efficiency regulations, which went into effect on July 1st and may be adopted by five other US states, limit the amount of power desktop computers can draw in a year, based on their components and expandability. Due to this, PC manufacturers are scrambling, gamers are up in arms, and everyone is confused by the math at hand, but it is not as cut and dry as you would think.

On July 26th, writer and content creator Marie Oakes spotted a new warning on Dell’s website under Alienware PCs, stating that “This product cannot be shipped to the states of California, Colorado, Hawaii, Oregon, Vermont, or Washington due to power consumption regulations adopted by those states.” While this is concerning by itself, “Any orders placed that are bound for those states will be canceled,” as well. This warning can be found underneath several of Dell’s Alienware desktops, but what is behind the change? 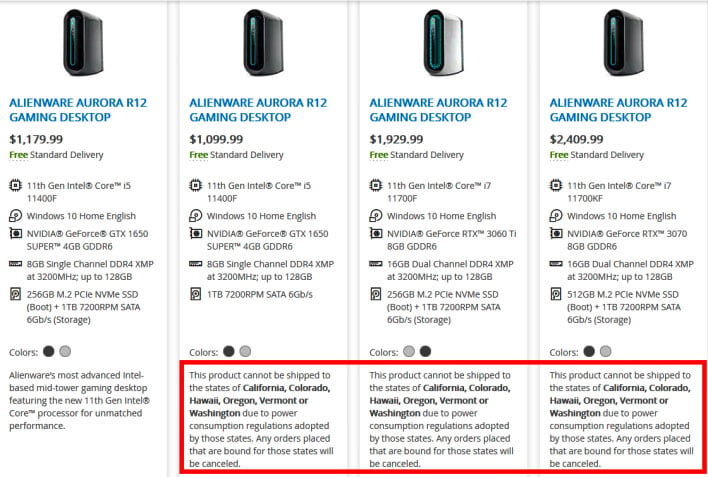 In a statement released to the press, Dell explains that this was driven by “California Energy Commission (CEC) Tier 2 implementation that defined a mandatory energy efficiency standard for PCs – including desktops, AIOs and mobile gaming systems.” The seemingly random “restricted” computers are actually selected based on several formulas outlined within the Title 20 Appliance Efficiency Regulations, which were adopted back in 2016 and only just this month went into effect. 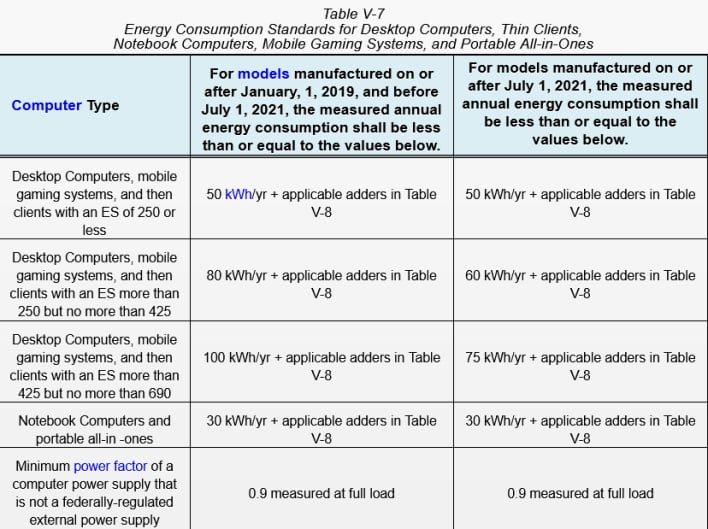 For example, PCs with the highest “expandability score,” based on the number and types of interfaces, have the most lenient maximum idle power limit in a year at 75kWh/yr. Then, this is combined with “potentially applicable adders” that loosen the belt around power consumption. You can see this in the chart below, but if you had a PC with 16GB of RAM, then you would get an extra 6.4kWh/yr. With an NVIDIA GeForce RTX 3080 Ti, you would be allotted an extra 41.4kWh a year atop everything else. The list of upside continues, but you get the idea.

With all the misinformation and confusion floating around with this new legislation, it should be abundantly clarified that this only affects idle power draw.  In fact, we reached out to the CEC who confirmed to us that "Yes, the efficiency standards for computers in the Title 20 Appliance Efficiency Regulations only apply to short-idle, long-idle, sleep, and off powers." There is also documentation available on the CEC website which explains this, but not quite as concisely. 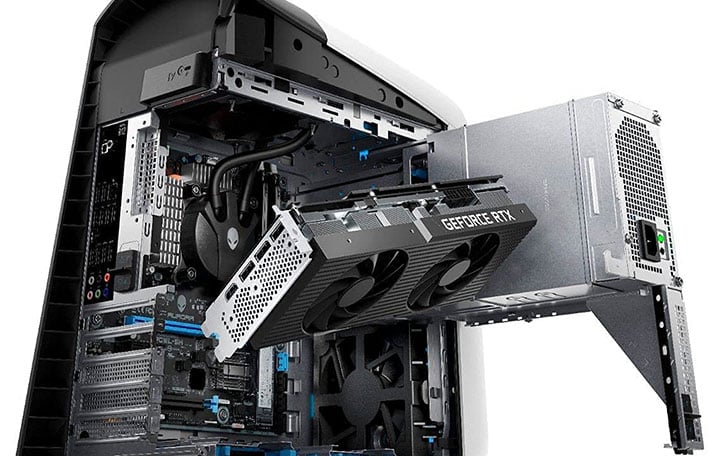 What is interesting, however, is that Dell will not be the only manufacturer that will have to perform these power draw calculations and decide whether or not to react, but thankfully it will only be the larger OEMs who will have to manage all this. Individuals and smaller boutique PC builders will not have to worry about this law for now.

Either way, the new energy efficiency rules have certainly thrown a wrench into things, and it will be interesting to see what companies do next when it comes to selling or purchasing PCs in some states. Thus, stay tuned to HotHardware for updates on this developing situation.

Update, 7/29/21 - The headline of this article and some sections were edited for clarity.