This Business Card Runs Linux And You Could Build One Too

Business cards are a staple in the business world and can help make a good impression. What kind of impression would you make if your business card not only shared your contact information, but also ran Linux? One embedded systems engineer did just that. George Hilliard created his own business card that can run Linux and shared the process on his website.

According to Hilliard, his idea for the business card came to him when he thought, “These processors are nearly cheap enough to give away.” He noted that he had seen electronic business cards before, but their functions tended to be rather limited. He believes that his own Linux business card could be a great idea for larger business, since they could likely get the needed materials at an even lower price.

Hilliard’s business card is a “minimal ARM computer running my customized Linux firmware built with Buildroot.” The card also contains a USB port that can be plugged into a computer. Once the card has been inserted, it will show his resume, some of his photography, a few classic games, a small 2048, and even a MicroPython interpreter. All of these features are on a 8MB flash chip. 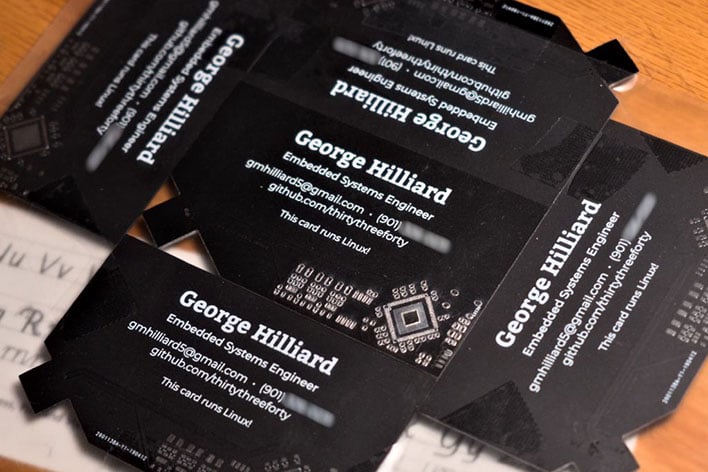 Hilliard noted that the “bootloader fits in 256KB, the kernel is 1.6MB, and the whole root filesystem is 2.4MB.” The processor is an Allwinner F1C100 and it includes both RAM and CPU. In total, the project cost him less than $3 each. This pricing does not include shipping, but he argued that this is still a good price for a Linux board.

The project was not without its hiccups. The first USB port was initially not long enough. The flash footprint was at first also wrong and Hilliard had to bend parts by hand. This was also his first time using a reflow oven. He found this to be a necessary tool since the parts he was using were so small.

This business card is definitely next-level and could be a fun way to show off your skills. Hilliard has kindly provided a detailed how-to and his source codes; you can find his full description and sources here.

(Images from George Hilliard via thirtythreeforty.net)