As the user base for cryptocurrency grows, so too do politicians and regulators looking to stymie the situation due to taxation and illicit activity concerns. Now, President Biden has backed a plan to tax proof-of-stake cryptocurrencies such as Ethereum via an amendment to a major bill advancing in the U.S. Senate.

The amendment that would change taxing for decentralized finance (DeFi) owners was brought up by Senators Rob Portman (R-OH) and Mark Warner (D-VA) in a cross-aisle move. The change would provide tax reporting exemptions to validators and developers attached to proof-of-work (PoW) networks like Bitcoin, leaving proof-of-stake (PoS) and other types of networks in the cold.

However, it appears that there is some concern about this change as Decrypt reports that Senator Cynthia Lummis (R-WY) “said a vote—which was expected to take place on Thursday night—will now likely come on Saturday.” While this could allow time for pushback on the change, the Biden administration getting behind it is a force to be reckoned with.

This is problematic because many projects in the crypto industry run off the back of decentralized finance projects like Ethereum. This includes many NFT projects that have recently become popular but may struggle if this change happens. As explained, “many projects in the decentralized finance (DeFi) space do not, and often cannot, identify their customers so making them subject to tax reporting could force them to shut down or leave the U.S.” 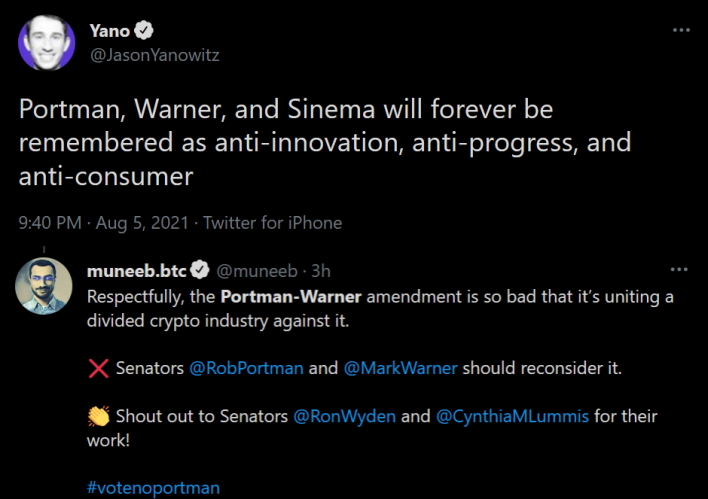 These concerns with the Portman-Warner amendment have subsequently sparked outrage among the cryptocurrency community. Moreover, it could simply cripple any cryptocurrency innovation that has or will come to the United States. It will be interesting to watch what happens, so stay tuned to HotHardware for updates on this situation which could pivot the future of crypto.