As the popularity of cryptocurrency continues to rise, so do the scams that attempt to steal your currency. The ShibArmy were made aware of one particular scheme yesterday targeting their crypto wallets.

Scammers have been targeting the cryptocurrency market for a while now. But it seems that some have turned their attention to those who own some of the increasingly popular Shiba Inu (SHIB). Shiba Inu is a decentralized cryptocurrency that was inspired by Dogecoin. As schemes have been popping up all over Twitter, Shiba Inu's official Twitter account has taken action.

One reason scammers are targeting Shiba Inu owners could be due to the fact that businesses like the Vegas Auto Gallery are now accepting cryptocurrency as a payment option to buy a car. AMC Entertainment recently announced they were about to accept Dogecoin along with other cryptocurrency as a means of payment. This has led to scammers promoting fake Telegram groups that use the promise of giveaways and other perks to bring in the SHIB community. Once they have their attention, some are being deceived into giving their wallet keys, email addresses and/or passwords. 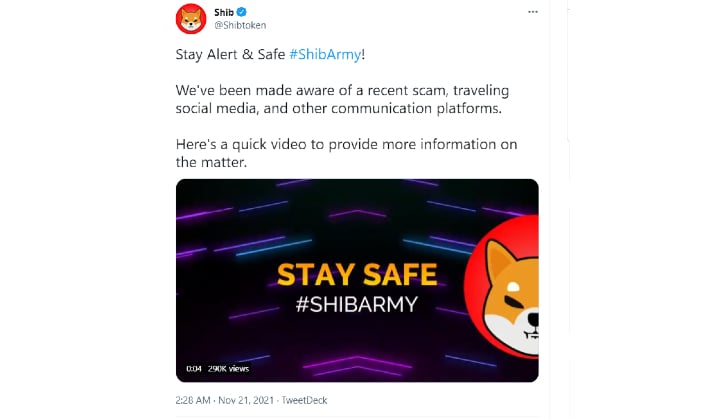 Shiba Inu is a fairly new entry into the world of cryptocurrency. It makes sense that it would take quick action against known scams in order to quell any fears some may have about the security of the currency itself. If the trust of its community were to be lost, it would be detrimental to its future success.

A large part of Shiba Inu's success lies in its peer-to-peer crypto exchange, named ShibaSwap. It is made up by three coins: SHIB, LEASH, and BONE. SHIB is a token built on the Ethereum network. LEASH tokens were originally introduced to be a rebasing agent, but due to its price being pegged to that of Dogecoin and capped at 100,000 coins, the peg is no longer maintained. BONE allows holders to vote on different proposals that are essential to the future direction of the project.

The alert sent out by Shibtoken on Twitter included warnings that there are no Shiba Airdrops, Shiba Bonus, Shiba Giveaways, or Shiba gifts globally. If you are an owner of Shiba Inu then hopefully you have not succumb to any of the scams that are currently circulating. As with anything on the internet, it always pays to do your own research before jumping into anything when it involves your financial assets.