Gamers are obviously thirsty for an updated Left 4 Dead title, or spiritual successor, the latter of which is what Born 4 Blood delivers. Currently in development by the same team that made both Left 4 Dead games, Back 4 Blood is drawing big numbers on Steam, coming close to 100,000 concurrent users on Saturday.
That is notable because Back 4 Blood is not yet been released in final form. Instead, the game's open beta peaked at 98,024 concurrent users on Steam. At the time of this writing, there are more than 38,000 players enjoying the title (with a peak concurrent user count of 76,486 over the past 24 hours, in case you're curious). 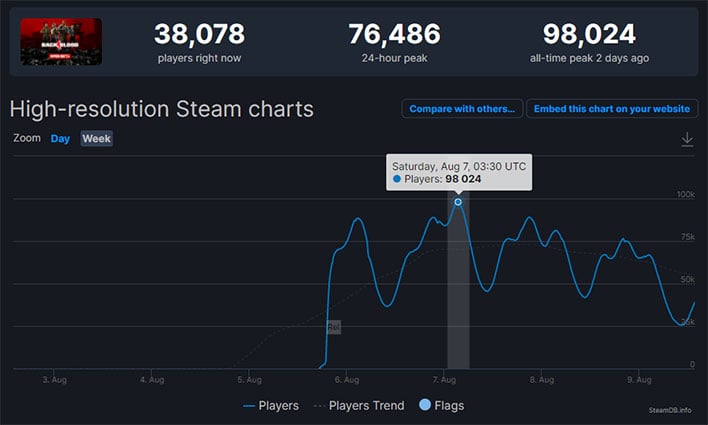 The numbers come courtesy of SteamDB on the heels of the game's first open beta period. There will be another open beta this weekend, and it will be interesting to see if the concurrent player count manages to hit and exceed the 100,000 mark.
Players who preordered the game are invited to participate—the next beta starts on August 12 at 12:00pm PT (3:00pm ET) and runs through August 16, ending at the same time. Alternatively, users can register for a chance to gain early access to Back 4 Blood before it launches in a couple of months.

"Back 4 Blood is a thrilling cooperative first-person shooter from the creators of the critically acclaimed Left 4 Dead franchise. Experience the intense 4 player co-op narrative campaign, competitive multiplayer as human or Ridden, and frenetic gameplay that keeps you in the action," the game's description reads.
This is not Left 4 Dead 3, but it does come from the same folks who developed the popular franchise for Valve, and likewise features plenty of zombie-themed carnage in a survival setting, with very similar gameplay elements. One thing that is different, however, is a 'rogue-lite' card system—players build decks with cards that affect traits like health and stamina.
Back 4 Blood is available to preorder for $59.99 and, barring any last-minute delays, will launch on October 12, 2021.