Earlier this week, we brought you our review of AMD's Radeon RX 6900 XT reference card, which is an excellent all-around performer (unless you're looking to run the tables with ray tracing enabled). Not long after, we saw the first custom Radeon RX 6900 XT cards announced by ASUS and ASRock.

While those initial custom cards were pretty much standard fare, ASUS has another, over-the-top SKU for well-heeled gaming enthusiasts out there. Witness the liquid-cooled ROG Strix LC Radeon RX 6900 XT, which is ASUS' latest flagship AMD graphics card. The ROG Strix LC is a 2.2-slot design with a low-profile heatsink, full-coverage cold plate (covering the GPU and GDDR6 memory), and a blower-style fan. ASUS also specs triple 8-pin power connectors, and recommends at least an 850W power supply. On the backplate you'll find a single HDMI 2.1 port, dual DisplayPort 1.4 connectors, and a USB-C port. 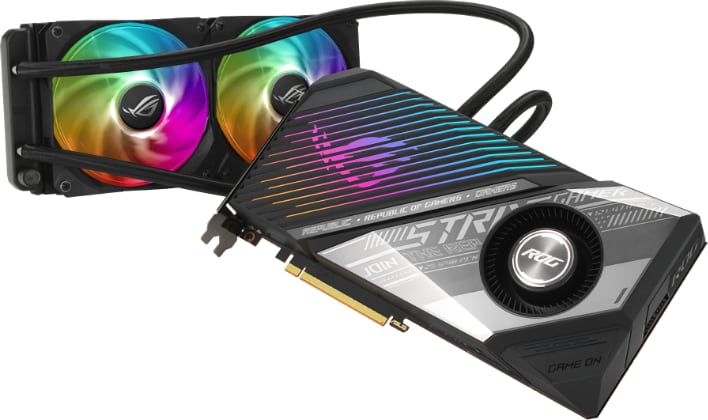 Unfortunately, ASUS has not given us any clues as to what the Game and Boost Clocks are for the ROG Strix LC, but we can expect for gamers to shoot for some lofty gains over the 2,015MHz (Game) and 2,250MHz (Boost) clocks of the reference cards.