You can find Arm's intellectual property in a wide range of devices, from smartphones and tablets, to wireless routers, TVs, and so much more. You can squeezes wearables in there as well (smartwatches and fitness bands). As it pertains to wearables, Arm is looking to advance the category in a big way with flexible electronics.
Flexible electronics is not a new idea by any stretch. However, Arm has produced what it says is a more complex design than what past efforts have consisted of, with a new prototype called PlasticArm. It is essentially a plastic-based microchip featuring a 32-bit Cortex-M0 processor, 456 bytes of ROM, and 128 bytes of RAM.
That is not a mind boggling amount of processing power (the Cortex-M0 is Arm's smallest, lowest power CPU), but even so, Arm says it is 12 times more complex than previous state-of-the-art flexible electronics. For all intents and purposes, this is a viable, natively flexible 32-bit Arm microprocessor.
"As ultra-low-cost microprocessors become commercially viable, all sort of markets will open with interesting use cases such as smart sensors, smart labels and intelligent packaging. Products using these devices could help with sustainability by reducing food waste and promote the circular economy with smart life-cycle tracking. Personally, I think that the biggest impact could be in healthcare— this technology really lends itself to building intelligent disposable health monitoring systems that can be applied directly to the skin," said John Biggs, a distinguished engineer at Arm Research. 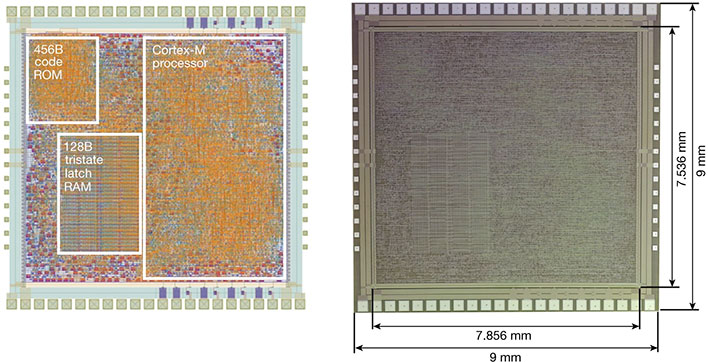 Arm goes into quite a bit more detail in a paper published to Nature, but the general takeaway is that this is something that can be integrated into everyday objects built around an ultra-thin form factor, at a cost low enough to be suitable for mass scale production and adoption.
The flexible PlasticArm chip fully supports the Armv6-M instruction set architecture, so the code generated for a Cortex-M0+ processor will also run on the processor derived from it, Arm says. There are some limitations, though. As currently constructed, programs have to be pre-programmed into the read-only memory (hardwired, in other words) before fabricating the flexible silicon.
"The current ROM implementation does not allow changing or updating of the program code after fabrication, although this would be possible in future implementations (for example, via programmable ROM)," Arm says.
So compared to traditional semiconductors, it is a bit of a rudimentary solution. However, it's also immensely promising. Arm envisions this leading to low cost and flexible smart integrated systems that could number in the trillions over the next decade, leading to an 'internet of everything' category.

"Having an ultrathin, conformable, low-cost, natively flexible microprocessor for everyday objects will unravel innovations leading to a variety of research and business opportunities," Arm says.