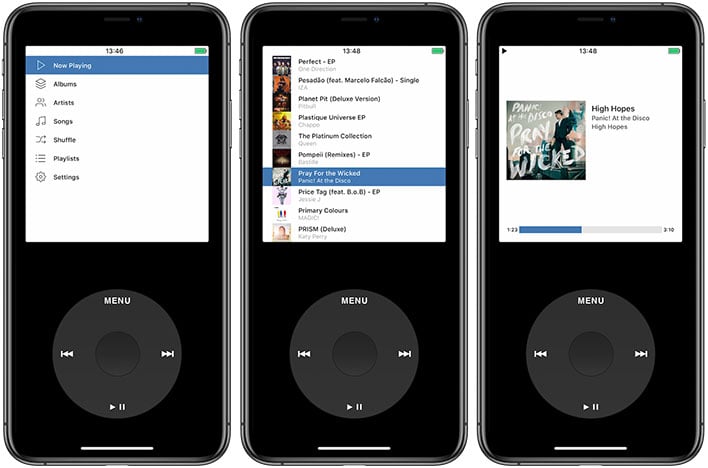 You've heard the saying, 'All good things come to an end', just in this case the end feels rather abrupt and petty. You see, an app called Rewound was making some heavy traction by allowing iPhone users to turn their handsets into virtual iPod devices by way of downloadable skins, complete with the iconic clickwheel. This did not sit well with Apple, which has decided to remove Rewound from the App Store.
I go back and forth on how I feel about this. The knee-jerk reaction is to rage at Apple for popping this balloon, especially after it already had allowed Rewound access to the App Store. As the developers of Rewound point out in a Medium post, the app "grew exponentially across the world from Japan to China to Iran to Russia and the rest of mainland Europe" before Apple killed it.
At its high point, Rewound climbed to No. 19 in the US Music App charts, and charted globally. So, why did Apple pull and about face and ban Rewound from the App Store? If you ask Rewound's developers, Apple "got SALTY."
The larger explanation is that Apple felt Rewound copied the iPod's design. Combined with the fact that people could make in-app Apple Music purchases, Apple seemingly felt Rewound could be mistaken for one of its own products.
Rewound said Apple did not come to this conclusion until people started downloading clickwheel skins, which do not come with the app. That's kind of Apple's point, though—with the skins in place, the iPhone does look a lot like an iPod from the days of old.
Naturally, the decision is not sitting well with Rewound's developers, who point out that...
The bigger issue here is Rewound says it can't update the app to get it approved by Apple without breaking the app for the more than 170,000 people who have already downloaded it. So, the developers are taking their ball and launching a GoFundMe campaign to bring a web version of the app, as well as an Android version.
Sadly, it's not clear if Rewound will ever find its back into the App Store.